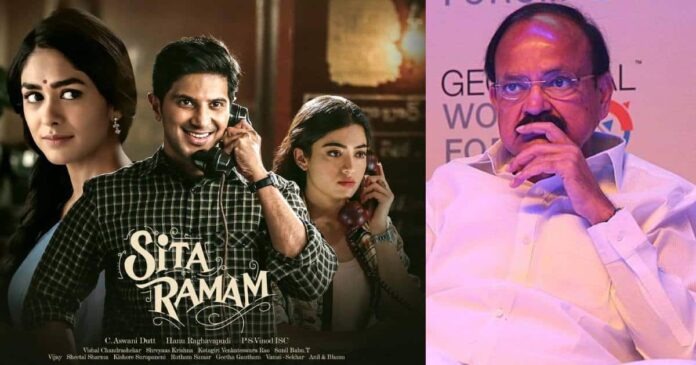 Telugu movie ‘Sita Ramam’ starring Dulquer Salmaan, is making news for more reasons than one. Apart from putting up a good performance at the box office, the movie is also receiving critical acclaim from different quarters.

Former Vice President M. Venkaiah Naidu who saw the movie on Wednesday was so impressed that he took to social media to express his thoughts.

“Watched the movie ‘Sita Ramam’. Good acting performances combined with technical expertise have come together to manifest in sheer visual poetry on screen. Unlike routine love stories, this movie has a brave soldier who leads to a plethora of emotions. A must-watch movie for everyone,” Naidu tweeted in Telugu.

Naidu’s obvious enjoyment of the movie, brings to mind former Deputy Prime Minister L.K. Advani who was known to relish movies in his heydays.

“It’s after a long time that I have had the pleasure of watching a good movie thanks to ‘Sita Ramam’,” Naidu tweeted in Telugu. He also complimented director Hanu Raghavapudi, producer Aswini Dutt and his Swapna Movie Makers team for coming out with a movie devoid of disturbing noises, and full of eye-pleasing visuals.

‘Sita Ramam‘ which released on August 5, has come as a relief to Tollywood which has been reeling under a series of box office disasters in recent times.

The romantic drama set against the backdrop of war follows the love story between a soldier played by Dulquer Salmaan and his lady love, played by Mrunal Thakur. Rashmika Mandanna plays the very significant role of Afreen. The story spans the period between the sixties and eighties.

Must Read: Prabhas’ Life In Danger If He Gets Married? Celebrity Astrologer Makes Shocking Predictions