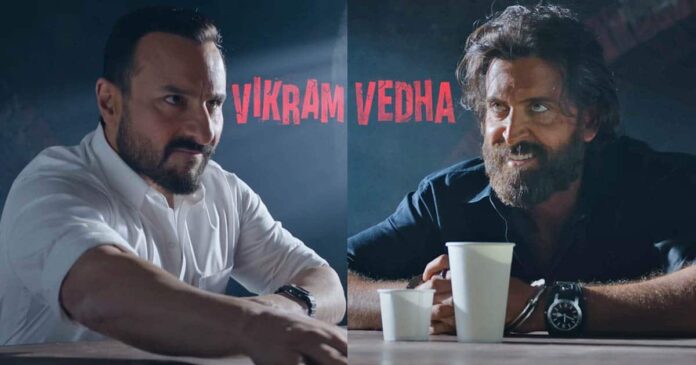 Vikram Vedha Box Office Day 2 Early Trends: There are a lot of hopes pinned on this Hrithik Roshan and Saif Ali Khan led action thriller. The reviews were highly favourable and many even called it a ‘near-perfect’ remake. Day 1 may have  under-performed compared to expectations but it seems the film is set for a good day 2! Scroll below for all the details.

Everything has been working right for this Pushkar-Gayatri directorial. The pre-release buzz was good and Saif Ali Khan, Hrithik Roshan kept the buzz intact as they promoted the film separately. Fans were eager to see their love-hate chemistry on-screen. Given the boycott trend across Bollywood, many have been skeptical before buying tickets on the first day itself after failures like Samrat Prithviraj, Runway 34, and Laal Singh Chaddha among others. But the word of mouth has been really great this time!

Vikram Vedha has made collections of about 10.58 crores on day 1. The advance booking reports have been better than yesterday with the number of shows being increased at some places. So, it’s clear that exhibitors are pinning high hopes on the film. Also, today’s occupancy has been much better throughout the day.

Speaking about day 2, as per early trends flowing in, Vikram Vedha has made collections in the range of 12.50-14 crores. This indeed is the push that the film required but the number of 15 crores or above would have been much better. The overall total now stands at 23.08-24.58 crores.

Let’s see how big Sunday turns out to be for this Hrithik Roshan and Saif Ali Khan starrer as the film must hit or cross the 40 crore mark in the first weekend.

Must Read: Black Panther 2 Box Office Projections (Domestic): To Make Less Than Its Prequel But To Be The Biggest MCU Movie Of 2022