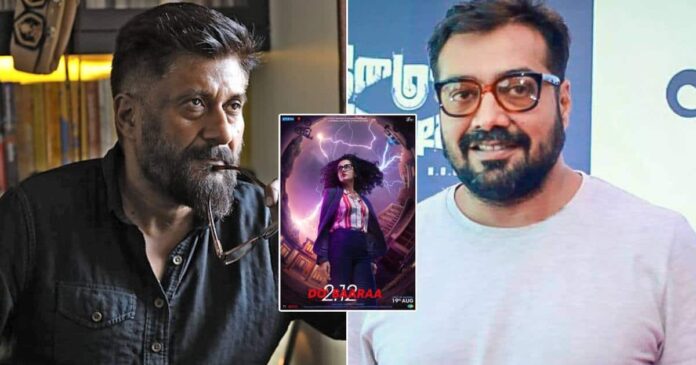 The Kashmir Files director Vivek Agnihotri has been making headlines for the past few days for his social media spat with director-actor Anurag Kashyap over Oscars nominations. The filmmaker now once again has to say something on the same.

For the unversed, the cold war between the two began after Anurag said that he hopes SS Rajamouli’s RRR would be selected to represent India at the Oscars race and not TKF. Read on to know what Vivek has to say on this.

This take by Anurag Kashyap definitely did not settle well with The Kashmir Files director Vivek Agnihotri as he straight away ended up calling Anurag a ‘vicious, GENOCIDE-DENIER lobby of Bollywood’ in his tweet.

Well, during his chat with India Today, when Vivek Agnihotri was asked to share his take on Anurag Kashyap saying RRR should be selected for the Oscars race and not The Kashmir File, Vivek sarcastically said, he hopes that Anurag’s recently released film Dobaaraa with Taapsee Pannu should be the one to represent India at the Oscars. He said, “I wish him all the best for his release. I hope people go and watch that film and make it more successful than The Kashmir Files. Hope it goes for the Oscars.”

TKF director Vivek also said that he would be happy if SS Rajamouli’s RRR or in fact R Madhavan’s Rocketry: The Nambi Effect would be chosen to represent India at the Oscars. However, he also feels his films deserve to be selected too. During the same conversation, he said, “It’s not in my hands. There will be a jury and the Oscars are in March next year. There are credible people who will decide which film should go. If they think it’s worthy of sending, they will send it, if they think it’s not, they won’t. It’s not a big deal. If RRR goes, I will be very happy. In fact, if you ask me one film I would want to pick up to go for Oscars, it’s R Madhavan’s Rocketry.”

Vivek also added, “The world should know that it’s not just Hindus who are being persecuted in this country, even some of the greatest scientists were also persecuted.”

What are your thoughts on The Kashmir Files director Vivek Agnihotri’s sarcastic dig on Anurag Kashyap? Let us know your thoughts in the comments below.