Volvo V90 Cross Country – All you need to know 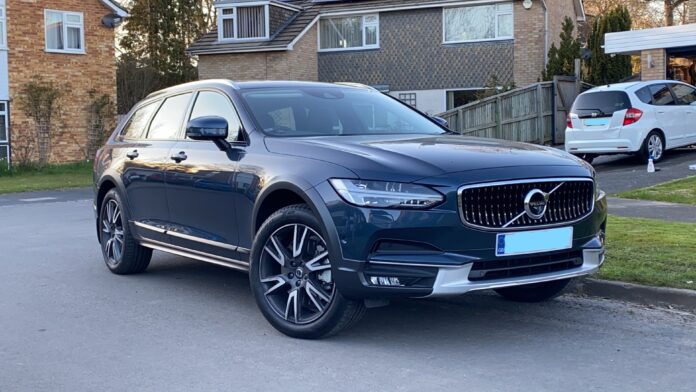 The Volvo V90 Cross Country is a handsome-looking car. While the front fascia and side profile up to the rear doors are similar to the S90, it’s the boxy estate extension that gives it its own identity. The tail section looks quite nice with its sloping windscreen and the signature tail lamps from Volvo Cars make their way on to the rear, giving it a modern look. The silhouette looks more butch because of the cladding all around along with those massive 20-inch wheels. Volvo Cars have also raised the car a bit, so it can take on SUVs for ground clearance. The Volvo V90 Cross Country gets all-wheel-drive as standard and it features adaptive air suspension like the S90. Estates haven’t particularly caught on in our market, but we can confirm that the Volvo V90 Cross Country is among the best-looking so far.

The cabin is identical to the one seen in the S90. The dashboard looks minimalist and gets a huge 9.0-inch touchscreen instead of too many physical buttons. It gets vertical AC vents on either side of the screen and instead of wood veneer, you get woven aluminium panels. Our test car came with tan leather seats, plus you get two other themes to choose from. The seats in the front are heated and offer good support; the V90 Cross Country also gets electric adjust for the bolsters, lumbar support and extendable squabs. There’s even a cooling function and a massage feature that gets three modes and speed and intensity that can be adjusted. Even the steering wheel is heated. The seats at the back offer good comfort, but are a bit on the firm side. There’s good headroom available while legroom remains more-or-less the same; there’s sufficient room for two at the rear while the third one will find the transmission tunnel coming in the way. There’s even a built-in jump seat option for kids and the wagon extension means boot space is aplenty at 560 litres. The V90 also get a space saver spare tyre under the boot. Features are full and plenty; you get a 1,400 watt Bowers and Wilkins sound system, four-zone climate control, a panoramic sunroof, 19 speakers, paddle shifters, full-LED headlights with an active high beam and a bending function, a head-up display and an electric tailgate.

The V90 CC is powered by the same D5 engine that does duty in the XC90. The 2.0-litre engine produces 231bhp and 480Nm of torque. The engine is so smooth, you can barely hear it inside the car. Power builds up well, but after 4000rpm, the engine becomes vocal. There isn’t much lag and you start feeling a surge in power before 1500rpm. However, on inclines, if you floor the throttle, there is a slight delay before the engine starts pulling away. Paired to the engine is an 8-speed automatic transmission, providing smooth shifts; however, downshifts are a bit slow. The best way to drive this car and enjoy it is in Sport mode with the help of the paddle-shifters. The V90 CC gets four driving modes: Eco, Comfort, Off-Road and Dynamic. In Eco mode, engine response isn’t great; it’s in Dynamic mode where the steering weighs up and the engine’s response improves. This mode also results in the suspension getting firmer.

Even off the road, this car impresses especially in its Off-road mode that transmits power to the rear wheel when needed; this also raises the car and engages hill-descent control. The car clears almost ever deep hole without scraping its sump. The all-wheel-drive and brake-type vectoring system work in sync to ensure traction is at its best. It can go off the road better than some luxury soft-roaders out there. The handling is aimed more at a relaxed type of driving style. The car feels pliant even in Dynamic mode and there’s fantastic grip available from the all-wheel-drive system. These big, low-profile rims might be a concern over bad roads in the city though, but you can have smaller wheels opted for instead.