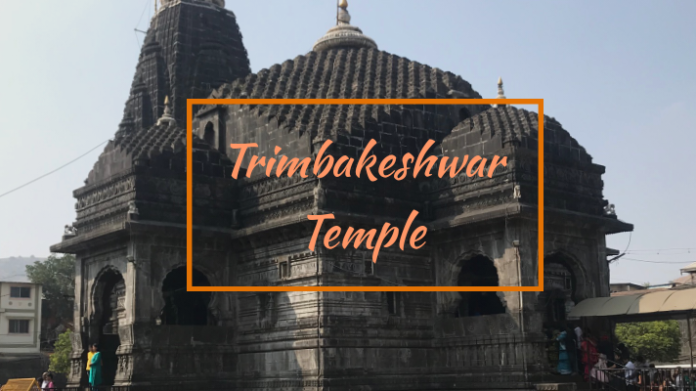 Trimbakeshwar is situated in a small village called Trimbak.
The temple of Trimbakeshwar Mahadev has a grand grandeur. This temple, enclosed within the courtyard of about two hundred and sixty by two hundred and twenty feet, is built of local black stone.
On either side of the entrance are long Dipamalas, in which an artistic type of brackets are projected.

Next to these and in front of the temple is a small but very beautiful structure – a small dome, in which Nandi, the vehicle of the Lord, is located. Inside it, there is a marble image of a bull with the front leg raised slightly.
The easternmost part of the temple is the mandapa, square and of massive proportions.
There is a door on each side of it.
Each of these entrances (except the western one, which opens into the gap) is covered with porches.

These porches have distinct terraces but the same entrance and cornice as the mandapas.

The openings of these porches are embellished with curved arches and molded pillars.
The roof is constructed from the architecture, with slabs rising in the stairs.
These slabs are externally curved and each supports a chakra termination, whose shape is related to that of the surmounting dome.

There is a lotus-like feather above the end of the wheel, which gives so much grace to the flattened domes of these beautiful structures.

The central part, a small rectangular verandah, intervenes between the mandapa and the sanctum.
The sanctum Santorum is a square inside, though outwardly it is a multi-angular star.

Deep vertically offset and horizontal moldings, and distant projecting cornices create memorable shadows and light patterns and give this massive pile a rich and spacious look.
Several figures of animals and humans and yakshas and deities add to this checkered pattern.

The moving coil and small bloom designs are part of the sculptured wealthiness of the construction. Every pilaster-like projection has a space in the center, containing some image or another. Above the sanctum is a beautiful spire with a curved outline.

Rows of kalash-like motifs decorate the corners. A huge Amalaka climbs the summit, which is a gift ‘Kalash’.

Many miniature replicas of himself are gathered around the summit.

This structure is the most beautiful and complete specimen of the North Indian or Indo-Aryan style found in Maharashtra.

It was built by the third Peshwa Balaji Bajirao (1740–1761) on the site of an older but more modest temple.
The structure took about thirty-one years to complete and cost somewhere around sixteen lakh rupees.

There are two stories related to Trimbakeshwar. There is a story about Simhastha Parva according to Padma Purana.

Centuries ago, gods and goddesses used to roam in India. He helped the saints and people living here in times of various hardships, especially the demons who were causing trouble.

However, this battle generally resulted in heavy losses to both the gods and the demons. It was decided to settle the issue of supremacy forever.
They agreed that whoever captures the Amritkumbh (immortal nectar) will be the winner. There was an Amritkumbh (a pot containing immortal nectar) on the ocean floor.

The gods were successful in getting the nectar by fooling the demons.
When the demons came to know about this, they started a violent fight for Amritkumbh (immortal nectar).
In this sequence, the drops of nectar fell at four places Haridwar, Prayag, Ujjain, and Trimbakeshwar.

Rishi Gautam lived in this area. Once there was a severe drought for 24 years.

For the rescue of the people, sage Gautama worshipped Lord Varuna (the rain god) and the Lord was pleased. He blessed the sage by giving him a boon of abundant rainfall in the area. Due to this, the area was green and filled with water.

But this made other sages jealous of Gautam. He sent a cow to destroy Gautam’s granary. She was injured and died when Gautam tried to shoo her away. Waiting for such an opportunity, other sages accused Gauma of the grave sin of killing the mother cow and forced her to do penance.

He was asked to worship Lord Shiva and have a bath in the Ganges.

Gautama gratified God Shiva, who in turn asked Ganga to arrived to Gautam’s place. Gautam and Ganga prayed to Lord Shiva to come here with Parvati and stay with her. He accepted the request to Lord Shiva, and he decided to settle here. Here, the river Ganges appeared as the Godavari river. Hence, it is also named Ganga Godavari or Gautami Godavari. The people here worship Godavari in the form of Ganga. Lord Shiva is also seated here in the form of Trimbakeshwar.