The Unique History of Beanie Babies 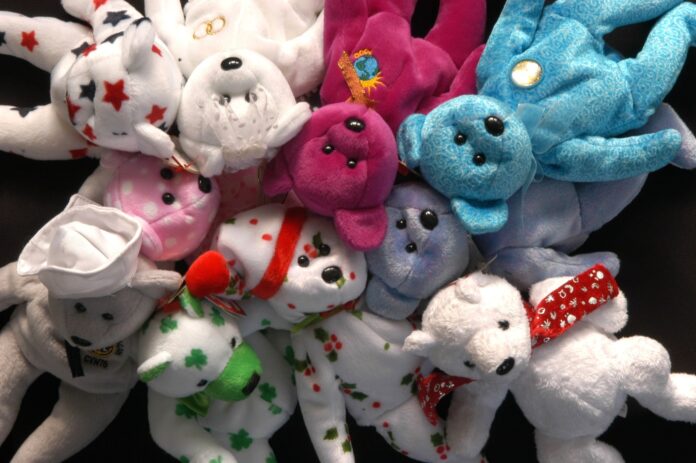 If you’re a 90s kid, you probably had at least one of the 822 different types of Beanie Babies.

These adorable stuffed animals took the world by storm in the 90s and early 2000s. Small business owners who got in on the hype early, paid off their mortgages with beanie baby fever.

Celebrities, sports teams, and even royals had beanie babies made after them. Have you ever wondered where all this hype started? Keep reading for all there is to know about the history of Beanie Baby toys.

In 1993, Ty Warner brought the stuffed Beanie Babies to the world toy fair in New York City. Warner had set out with a toy he knew was affordable and different. These unique and colorful critters all had names and could pose with the help of the beans.

They started getting mass-produced in 1994 and were five U.S. dollars. The price point was palatable enough that they made great gifts for kids everywhere. That said, the real edge that the Beanie Babies got came in 1995.

Starting in 1995, Warner made a business move that would change his life as well as the lives of many others. He introduced a new policy that would bring certain Beanie Babies into retirement.

Once Ty Warner introduced retirement, sales skyrocketed. Both FOMO and panic started to set in, leading Beanie Babies to fly off the shelves.

This is also when the demographic of these toys made a shift. While adults held the purchasing power, earlier the adults had been buying for their kids. After the scarcity factor was introduced, though, adults started collecting them for themselves.

The Christmas collection of 1998 allegedly brought out the absolute worst in people. Grown men began to buy up the collection and sell them for huge markups on eBay. Suddenly these cute critters, aimed at kids, were investments.

If you were to ask anyone born after 1996 about Beanie Babies, they wouldn’t remember them as vividly. The height of the Beanie Baby toy was in the holiday season of 1998. The toys were still sold, but they had dropped off by the time those born in the late 90s were conscious.

Of course, that’s not to say these critters have faded into obscurity! TY never stopped putting out stuffed animals! Even today, Beanie Babies have taken a new form as the doe-eyed and adorable Beanie Boos.

Besides that, people still collect the original Beanie Babies. They still make amazing gifts and have the nostalgia factor among other reasons!

The Rich History of Beanie Babies

Fads have come and gone throughout the years, but few match the chaos of Beanie Babies. Ty Warner went from a small-time toy maker to a business tycoon in a few short years. These nostalgic toys won’t be forgotten anytime soon!

Want to read more? Check out more on our blog.

Facebook
Twitter
Pinterest
WhatsApp
Previous articleHow Do I Choose the Best Moving Company in My Local Area?
Next articleHow to Choose a Dentist for a Complete Smile Makeover

3 Types of Camping Lights for Your Next Camping Trip

There's nothing like enjoying the peace and quiet of nature. There are so many wonderful benefits of camping. But having those benefits means a...
Read more
General

Shopping for a Piano? 4 Things to Look For

Music has a "well-known impact on the emotional state," according to a PMC article, and I'm sure you'll agree. Playing the piano allows you...
Read more
General

How to Stick to Your Retirement Budget

The Covid pandemic has taken a toll on everyone - possibly even you and your retirement. A recent poll indicated that 59% of Americans...
Read more

Did you know that 13% of Americans move each year? If you have a home you're thinking about selling, you might want to consider using...
Read more

With 36% of employees willing to give up money to enjoy their job more, it's no surprise that many people are unhappy with their...
Read more

If you are managing a personal injury case, you know the difficulty in keeping track of the various appointments, judge appearances, and other data...
Read more

Recently, the world has seen a rise in movements regarding the power and quality of equity, or equality. Unfortunately, these words that mean equality has...
Read more
Load more