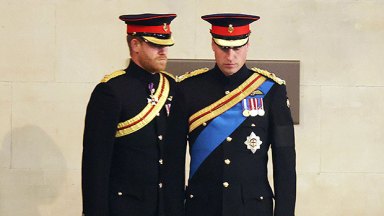 Prince Harry is finally opening up about what happened inside Sandringham House when he met with Queen Elizabeth II, Prince Charles (now King Charles III), and Prince William on January 13, 2020, to discuss his and Meghan Markle’s future with the royal family. In the fifth episode of Harry & Meghan, Prince Harry reveals that Meghan was supposed to be in the meeting, but it never materialized until she went back to Canada to reunite with baby Archie.

“It was clear to me that they’d planned it so that you weren’t in the room,” Prince Harry says to Meghan. He goes on to say that he went into the meeting with the “same proposal that we’d already made publicly. But once I got there, I was given 5 options. One being, all in, no change. Five being, all out. I chose option three in the meeting. Half in, half out. Have our own jobs, but also work in support of the Queen. It became very clear very quickly that goal was not up for discussion or debate. It was terrifying to have my brother scream and shout at me, and my father say things that just simply weren’t true and my grandmother, you know, quietly sit there, and sort of take it all in.”

Prince Harry admits that from the Queen’s perspective “there are ways of doing things, and her ultimate sort of mission, goal/responsibility is the institution.” He noted that the Sandringham meeting “finished without any solidified action plan.”

He adds, “I think from their perspective that it was more about us and maybe the issues that we had as opposed to their partner, the media, and themselves, and that relationship that was causing so much pain for us. They saw what they wanted to see.”

Prince Harry confesses that the “saddest part” of the whole situation was “this wedge created between myself and my brother so that he’s now on the institution’s side. Part of that, I get. I understand, right? That’s his inheritance.”

The same day as the meeting, Prince Harry points out that a story was released saying that part of the reason he and Meghan were leaving was that “William had bullied us out.” When Prince Harry got into the car after the meeting, he was told about a joint statement released by him and Prince William squashing that story. Prince Harry didn’t know anything about the statement.

“I couldn’t believe it. No had asked me. No one had asked me permission to put my name to a statement like that,” Prince Harry says in the docuseries.

Prince Harry reveals that he called Meghan after that, and she began to cry because “within 4 hours, they were happy to lie to protect my brother, and yet for 3 years, they were never willing to tell the truth to protect us.” That was the breaking point for Prince Harry and Meghan.

In the fourth episode, Prince Harry opens up about how he and Prince William had made “an agreement” years ago to not let their communications office trade stories about them and pit them against each other. “I would far rather get destroyed in the press than play along with this game or this business of trading. And to see my brother’s office copy the very same thing that we promised the two of us would never ever do, that was heartbreaking,” Prince Harry admits.

Prince Harry and Meghan stepped down as senior royals. They went on their “farewell tour” in March 2020. The couple then departed the U.K. They currently live in California with their two children.