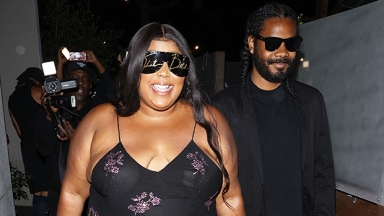 Lizzo is the birthday girl! The “Juice” hitmaker arrived at Craig’s in West Hollywood to celebrate on April 26, the night before she turned 34. Lizzo showed up to the celebrity hotspot on a party bus and was helped off the vehicle by her mystery boyfriend. The Grammy Award winner had a giant smile on her face as she and her beau held hands as they walked inside to commence the celebrations.

Of course, Lizzo wore the most fabulous outfit for her birthday party. Her full look included a black and purple feathered dress that showcased her sexy curves, a pair of black sunglasses with “That B**ch” written out on the lens, and a pair of purple heels that matched her dress.

Walking into the party right beside Lizzo was her handsome boyfriend, whose identity still remains a mystery. Lizzo’s beau slightly matched the birthday girl with his all-black outfit that included a jacket, dress pants, and a pair of sunglasses. The happy couple surely partied with her friends past midnight when Lizzo officially turned 34.

Lizzo’s Most Gorgeous Performance Looks Of All Time

Lizzo has been in a relationship with this mystery man since at least March 2021, when they were spotted kissing on a balcony in Malibu. Five months later, they enjoyed a date night at Craig’s, followed by a night out at an Asian fusion restaurant in Beverly Hills in October. The “Truth Hurts” rapper officially confirmed the romance when she appeared on Andy Cohen‘s radio show on April 18, although she still declined to reveal his identity.

“Yeah, whatever, yeah,” Lizzo responded when Andy asked if she was still dating the mystery man. She also revealed if it’s difficult dating someone as a celebrity. “If you have the right person, no, not at all. It is not even a factor. It should be mutually supportive no matter what that person does,” the superstar singer said.