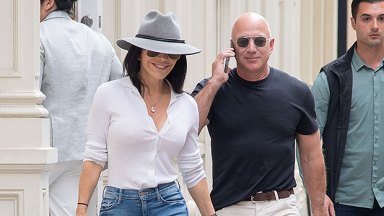 Jeff Bezos, 58, and Lauren Sanchez, 52, looked as relaxed and happy as could be during their latest casual outing. The former CEO of Amazon and his girlfriend took a stroll through the Soho area of New York City and visited Brunello Cucinelli as they flashed smiles to onlookers and donned stylish outfits. Jeff’s outfit included a black t-shirt and tan pants with brown sneakers and Lauren’s included a white button-down top and jeans with tan pointy-toed shoes and a gray hat.

The lovebirds both wore sunglasses with their looks as well and Lauren carried a tan purse that matched her outfit perfectly. At one point during the outing, Jeff was spotted on the phone as his lady love walked slightly ahead of him. They didn’t seem to pay much attention to cameras and truly looked comfortable while beside each other.

Jeff and Lauren’s latest NYC outing comes after they made headlines when they went on a double date with Kim Kardashian and Pete Davidson last month. The couples enjoyed dinner at A.O.C. restaurant in Los Angeles, CA together and stayed there for a few hours before leaving. The meetup came after it was announced that Pete was supposed to join the crew aboard the New Shepard for a Mar. 23 trip to space. When the Blue Origin, which is Jeff’s privately funded aerospace manufacturer and sub-orbit spaceflight company, announced that the flight had changed to Mar. 29, the Saturday Night Live comedian could no longer attend.

“Pete Davidson is no longer able to join the NS-20 crew on this mission,” the official Blue Origin Twitter account tweeted out on Mar. 17. “We will announce the sixth crew member in the coming days.”

When Jeff isn’t trying to team up with Pete to go to space, he and Lauren are attending other PDA-filled outings together. One of the most recent was a Justin Bieber concert, where they made out as they held onto each other in the VIP section of the venue. Jeff and Lauren have been dating since around 2019 and reportedly had a fling in 2018

Image Credit: ABC Gabby Barrett killed it while performing during the season 20 finale of American Idol on May 22. The singer returned...
Read more