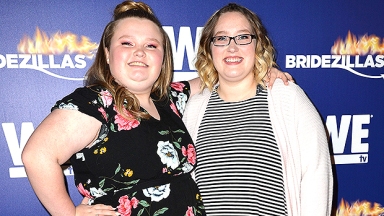 Mama June surprised fans in June by announcing she married her boyfriend Justin Stroud in a secret ceremony in March. Apparently, fans weren’t the only surprised ones. In an interview on July 11, two of the 42-year-old reality star’s daughters, Alana ‘Honey Boo Boo” Thompson, 16, and Lauryn “Pumpkin” Efird, 22, revealed they had no idea their mother had tied the knot with her 34-year-old beau when she announced the news. “We didn’t know about it,” Lauryn confirmed to E! News. Lauryn even said she received a “receipt” in the mail that her mother had applied for a marriage certificate, but Mama June denied such plans. “I asked her about it just recently. She denied it. And then eventually she was like, ‘Oh, I got married’ and we were very, very shocked,” she explained.

Alana has endured a rocky relationship with her mother, who temporarily lost custody of her to Lauryn after she and her then-boyfriend Geno Doak were arrested on drug possession charges. Lauryn was granted full custody of and was officially named the legal guardian to Alana in April. Mama June defended the court order in a statement on June 13 and said Alana simply “chose” to live with her sister. “People don’t understand the custody thing. It’s not like somebody ‘lost custody.’ In the state of Georgia, you do temporary guardianship every year and [Alana] had been with [Lauryn] in my addiction,” she explained on Page Six’s Virtual Reali-tea. “Well, at the age of 12, you’re able to make your choice.”

Mama June: Photos Of The Newly Married ‘From Not To Hot’ Reality Star

She also gave an update on their relationship. “I do see her, I do talk to her. We do communicate,” the mother of four noted. “So it wasn’t like any difference. The only difference is she’s not sitting right here beside me in my home every day.”

Meanwhile, Alana, who first rose to fame on TLC’s Toddlers & Tiaras, has experienced a blossoming love life of her own. She is dating 20-year-old Dralin, who she introduced her family to in the sixth season of Mama June: Road To Redemption. Lauryn’s husband, Josh Efird, seemed to be accepting of Alana’s man and gave him the traditional protective brother or father speech: “The only I ask is respect and you treat her really, really good. And if you don’t I’m just gonna break your neck,” he warned.

Justin Stroud: Everything To Know About Mama June’s New Husband