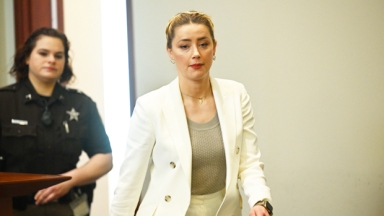 Amber Heard wasn’t too happy about being categorized as having personality disorder during her ex-husband Johnny Depp‘s defamation trial. Psychologist Shannon Curry, hired by Depp’s lawyers, said that after examining Heard’s mental health records and evaluating the actress for 12 hours over two days in Dec. 2021, she concluded Heard suffers from borderline personality disorder and histrionic personality disorder.

Upon hearing this diagnosis, Heard seemed noticeably irritated, rolling her eyes while in court.

“She obtained scores that were consistent with those diagnoses,” Curry said during the hearing. “I present science regardless of what that science may be,” she added, responding to Heard’s attorney, Elaine Bredehoft, who tried to discredit the testimony due to Curry being hired on Depp’s behalf.

Curry, however, continued in her testimony by noting some of the primary characteristics of BPD that Heard exhibited, including “a lot of inner anger and hostility,” a tendency to be “self-righteous” and “fluctuating moods.”

“They can react violently, they can react physically,” she said. “Oftentimes they will be abusive to their partners.”

Curry, who noted her experience with US combat veterans, said that it was her opinion Heard didn’t suffer from post-traumatic stress disorder (PTSD) and had “grossly exaggerated her symptoms in a test she was given.

Forensic psychologist talking about people with BPD as she has diagnosed #AmberHeard:

They are very interested in looks.
They utilize their looks to get the attention they’re seeking. #JohnnyDepp v #AmberHeard @LawCrimeNetwork pic.twitter.com/ZM3HQ63SUI

Depp’s defamation trial against his ex-wife continues, and both actors seem to be pulling out all the stops in their battle against each other. While being cross examined on Monday April 25, defense’s lawyer J. Benjamin Rottenborn played an audio snippet of a discussion between Depp, 58, and Heard, 36, where he told his ex-wife that he wanted to “walk away” or else they would have a “bloodbath” of an argument.

The section of the conversation played in court began with the Pirates of the Caribbean actor apparently telling Amber that he needed some space. “Walking away is necessary—is necessary, especially between you and I. It is of utmost importance, because the next move, if I don’t walk away—or just go out for a little while—it’s just going to be a bloodbath,” he said. “It’s just not worth it.”

Amber responded that she also didn’t want a bloodbath, rather than him to leave. “I’m not trying to say, ‘Hey, by the way, no one in their right mind is going to choose a bloodbath over walking away.’ Obviously, if you’re given the option between the two—,” she said, before Johnny interrupted to ask a question. “Then, why has it been chosen so many times?” he said.