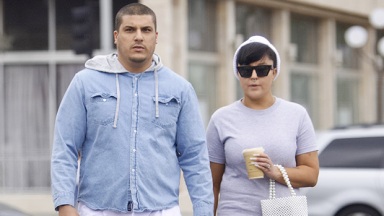 Amanda Bynes was seen kissing her fiancé Paul Michael just hours after she claimed to have kicked him out of her house. The 35-year-old former actress appears to have patched things up with Paul as they were spotted out together in Los Angeles on Thursday (April 28) packing on the PDA. Earlier in the day, Amanda had taken to her Instagram to speak out on the issues she was allegedly having with Paul, which she said caused her to ask him to leave their home.

In the snaps, Amanda and Paul looked to be back on the same page as they kept close to each other during their afternoon outing. The Easy A actress, rocking a gray tee and faded jeans, placed her hands around Paul’s waist as she went in for a kiss. Amanda appeared in deep conversation with her fiancé as she held a beverage and a small handbag. Paul, meanwhile, donned a denim hoodie and sweats while he leaned in to smooch the star.

The couple had recently moved in together following the end of her nine-year conservatorship. After being granted her freedom by Judge Roger L. Lund of the Ventura County Court on March 22, the She’s the Man alum quickly began making plans for the couple to make a home for themselves. “She’s doing very well and looking forward to moving into her new property with Paul. They’re actively searching for furniture and she’s excited about all of it,” her lawyer told People. “She’s ecstatic to receive her parents’ full love and support behind her decision to terminate the conservatorship.”

Amanda Bynes Through The Years: Photos Of The Nickelodeon Star

Back on Valentine’s Day 2020, Amanda revealed the couple were engaged. “Engaged to tha love of my life,” Amanda captioned a photo of a massive diamond ring on her finger via Instagram. In Septemeber of last year, the pair sparked wedding rumors as Amanda was snapped with a new ring while Paul wore a simple gold band on his ring finger.

Facebook
Twitter
Pinterest
WhatsApp
Previous articleRob Kardashian ‘Can’t Wait’ To Have ‘Another Brother’ In Travis Barker – Hollywood Life
Next articleDelhi HC: Why can’t RIL be made a party to Amazon-Future case?