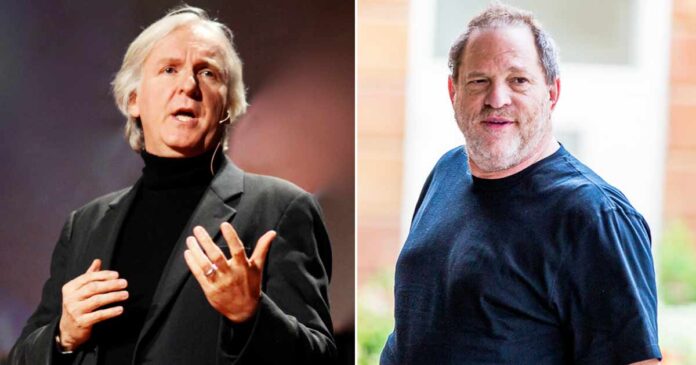 Canadian filmmaker James Cameron is one of the greatest directors in Hollywood and is well known for making science fiction and epic films. He helmed films like The Terminator, Titanic, Avatar, and Aliens. He once claimed that he ‘almost hit Harvey Weinstein with his Oscar’. Scroll down to know more.

Disgraced Hollywood producer Harvey became one of the most prominent targets of the Me Too and Times Up movements. Several artists accused him of sexual abuse at the highest levels of corporate America, entertainment, and the media. He was even found guilty of r*ping a former aspiring female and s*xual assaulting a production assistant.

Titanic director further said, “And the music had started to play to get back in our seats. The people around us were saying, ‘Not here! Not here!’ Like it was ok to fight in the parking lot, you know, but it was not ok there when the music was playing, and they were about to go live. It’s kind of a long story, but it has to do with Guillermo del Toro and how badly he was dealt with by Miramax on Mimic. Harvey came up glad-handing me, talking about how great they were for the artist, and I just read him chapter and verse about how great I thought he was for the artist based on my friend’s experience, and that led to an altercation.”

Meanwhile, James Cameron is gearing up for a sequel to Award-winning 2009 epic adventure sci-fi film Avatar. The film is titled Avatar: The Way of Water and it is all set to release in December this year.