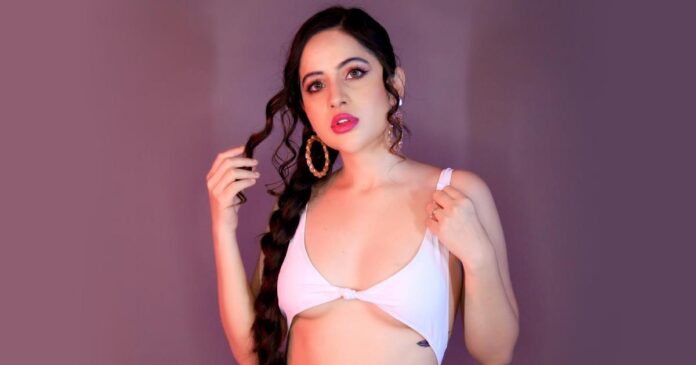 Uorfi Javed has become the talk of the town and how! The OTT star leaves no stone unturned to hog all the limelight every time she steps out, thanks to her fashion choices. The actress is in the news every now and then for sporting the most bizarre outfits. This morning, Uorfi took the web by storm once again when she went n*de leaving one and all shocked. In the viral photo, the controversial queen is seen hiding her assets behind her fake and long tresses.

For the unversed, the actress was earlier in the news when she posted a video of her se*y self laying on the bed of roses.

Uorfi Javed is currently in the news for two reasons- one her latest viral photos, which we brought to you a while back, and other, her being a part of a reality show. If the latest reports are anything to go by then, Uorfi is likely to be seen in Bigg Boss 16. Yes, you read that right! The controversial actress has been approached to be a part of Salman Khan shows and she is already in talks with the makers, reports Telly Chakkar.

ICYMI, Uorfi aka Urfi Javed was a part of Bigg Boss OTT. While she was the first to get eliminated from the web show, she made a lot of noise right and grabbed the headlines. It was after her exit from BB OTT only when she became the talk of the town with her bizarre fashion choices.

Meanwhile, a lot of names of possibly Bigg Boss 16 candidates are popping up every now and then. A few media reports state that the tentative list of candidates includes names like Arjun Bijlani, Sanaya Irani, Shiny Ahuja, and Divyanka Tripathi.

Speaking about Uorfi Javed, she was recently in the news when she accused Anupamaa actor Paras Kalnawat of getting her ousted from the show. Earlier in her interview, Urfi was quoted saying that Paras won’t work with her. They were supposed to work in Anupamaa together. However, Paras asked the team to not cast her. The reason was his girlfriend, who didn’t want them to work together.

Coming back, with Uorfi Javed being the talk of the town, she has all the qualities to become Bigg Boss 16 contestant, don’t you agree with us?

Must Read: Armaan Khera Opens Up On Doing Kissing Scenes With Masaba Gupta: “She Gave Me A Couple Of Examples Like Ranbir Kapoor In ‘Yeh Jawaani Hai Deewani’