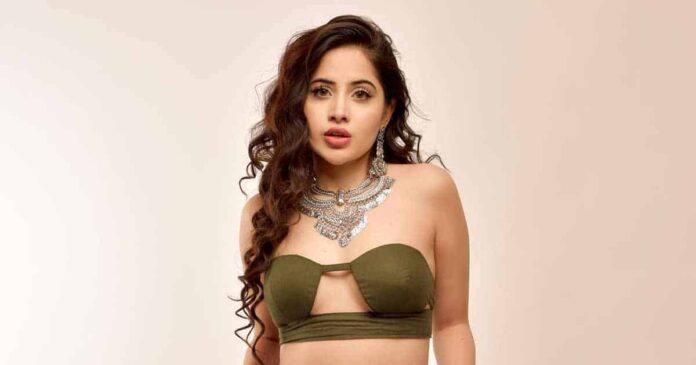 Internet sensation Uorfi Javed holds no qualms in voicing her opinion. We have repeatedly seen Bigg Boss OTT calling a spade a spade and expressing the same on her social media too. Uorfi, always becomes the hot topic of discussion owing to her bizarre fashion choices. Recently, the actress turned heads when she went n*de on social media. After laying on the bed of roses, Uorfi was seen going topless for her latest photoshoot.

Despite being trolled every now and then and receiving hatred, the actress still manages to become the talk of the town.

Recently, Uorfi Javed called out India’s Judiciary System in her latest Insta post. Taking to Insta story, the actress posted the photo of a man and slammed the system for letting him out on bail. The man in question has apparently threatened to kill and cyber-r*pe her.

Taking to Insta stories, Urofi Javed wrote, “Apparently this man is out on bail, the man who threatened to kill me, cyber rape me, is out and I feel fucking unsafe. I’ve lost all faith in the system. No place is safe for women. In India, you can molest/blackmail as many women as you want and nothing will happen to you. If me being a public figure, I have to go through this, I can’t even imagine what normal girls go through.”

The Internet sensation Uorfi Javed was recently in the news when she got into a war-of-words with TV actress Chahatt Khanna, who had taken a dig at her for her fashion choices. In her reply, Javed had dragged her personal life and commented on her divorces. However later, she apologised for the same and called it low.

Speaking to paps, Uorfi Javed was heard saying, “I was wrong. I shouldn’t have commented on her divorces. It was very low of me. No matter what anyone says I should keep my calm and I should stand for what I believe in. So that was wrong on my part.”

Coming back, what are your thoughts on Uorfi Javed’s Insta story?

Must Read: Uorfi Javed Surprises With An Outfit Made Out Of Stones After A Netizen Said “Isko Pathar Se Maro,” Fans React, “If I Throw Shoes On You…”