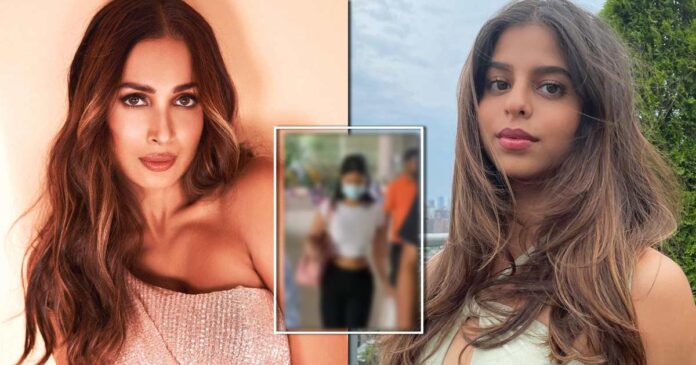 Suhana Khan is all set to make her acting debut with The Archies, directed by Zoya Akhtar. Given she’s the daughter of Bollywood superstar Shah Rukh Khan, there are a lot of eyeballs on her. The budding star returned from London last night and her casual look has left eyes popping. Just not that, many are comparing her to Malaika Arora. Scroll below for all the details.

It has become a trend for Bollywood stars to face trolls irrespective of what they are doing. Whether it is Malaika Arora walking towards her gym or Nora Fatehi posing for the paps, it is something or the other that offends netizens.

The latest one on their radar is Suhana Khan. Shah Rukh Khan’s daughter was seen at the airport last night as she arrived from London. She opted for a casual look as she wore a white crop top and paired it up with baggy trousers. One could see a white jacket in her hands while she carried a peach-coloured bag on the other.

Netizens felt that Suhana Khan seemed to be walking like she’s a superstar. Many took to the comments section and began mocking her. Some even compared her to Malaika Arora.

Take a look at the video below:

Must Read: Kangana Ranaut Hails Kartavya Path & Calls Herself ‘Netawadi’ & Not ‘Gandhiwadi’: “Several People Get Troubled By The Way I Speak”