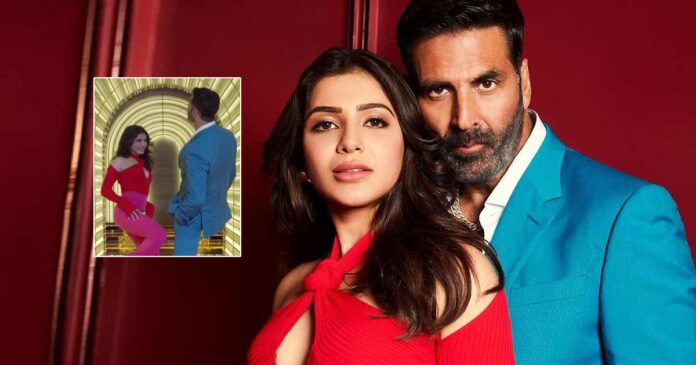 Stars Samantha Ruth Prabhu and Akshay Kumar, who will be seen on the upcoming episode of ‘Koffee With Karan’, grooved to the popular track ‘Oo Antava’ from the film ‘Pushpa: The Rise’.

A clip of Samantha and Akshay dancing on the number, originally picturised on Samantha and Allu Arjun, was shared on the Instagram page of Disney+ Hotstar.

Guests, Samantha and Akshay, of filmmaker Karan Johar‘s show were seen doing the hook step of the number, which was released on January 7 and currently has 272,289,880 views.

The caption of the video reads from Koffee With Karan 7 reads, “The cool and the killer raising temperature in the house!”

The teaser of the third episode of Koffee With Karan 7 was unveiled on Tuesday. Akshay made his entry in true Khiladi fashion, carrying the show’s debutant Samantha in his arms. The episode marks his third appearance on the show.

Recently, the first official promo of Samantha and Akshay Kumar appearing on Koffee With Karan 7 was dropped on social media. The promo took social media by storm as it saw Akki lifting Sam in his arms. When Karan Johar asks him he lifted number 1 actress in his arms, Samantha says, “I am not complaining.”

The new episode of ‘Koffee with Karan’ Season 7 will drop on Disney+ Hotstar on Thursday at 7 p.m.