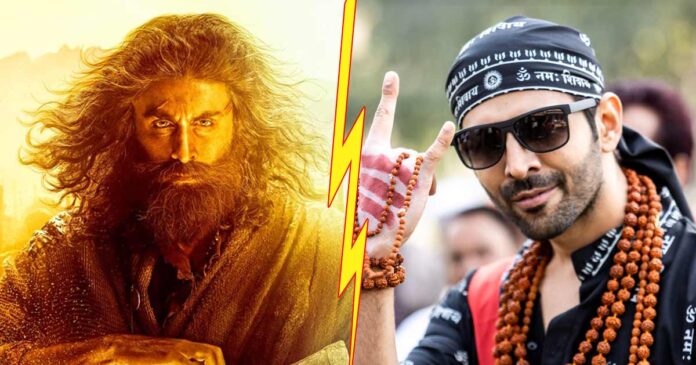 Shamshera box office is going to be an interesting case study for many pundits as the film’s collections, high or low, are surely going to be the talk of Tinseltown. There’s going to be a huge debate around Ranbir Kapoor’s ‘choice of script’, his ‘script sense’ even after he’s coming straight after the blockbuster Sanju.

If you filter out South Indian films from 2022 (KGF; Chapter 2, RRR to be precise), Kartik Aaryan holds the record of Bollywood’s biggest opener with 14.11 crore. Though it’s been 7 months into the year, there hasn’t been one offering from Bollywood which has even crossed the 20 crore mark (which to be honest isn’t ‘a lot’ considering a KGF: Chapter 2 can earn 53.95 odd crores on day 1 for just its Hindi version).

Is Ranbir Kapoor, Sanjay Dutt, and Vaani Kapoor’s Shamshera backed by Yash Raj Films an answer to KGF: Chapter? Of course not! But, yeah, it can earn some brownie points for Bollywood. It can very well turn out to be the highest opener of 2022 as far as its advance booking and other box office numbers are currently hinting at.

Since this morning, the film’s advance booking numbers are looking to pick up in major cities countrywide. Given it’s Ranbir Kapoor coming back after 4 long years on-screen, his loyal fan base would flock into cinema halls for the film. Being a big-screen masala actioner, Shamshera box office numbers would also be helped by viewers from the interior belts as well.

Considering Sanju was immensely hyped and also was a biopic of someone who’s known by the moviegoers for years now, it managed to open humongous at 34.75 crores taking its opening weekend around 120 crore mark. Of course, it won’t be fair to keep expectations even close to that, but to say it’ll cross 15 crores on day 1 shouldn’t be outrightly wrong.

Under current circumstances and negativity around Bollywood, Shamshera box office day 1 should cross the 15 crore mark dethroning Kartik Aaryan’s Bhool Bhulaiyaa 2 by being the highest opener of Bollywood in 2022.