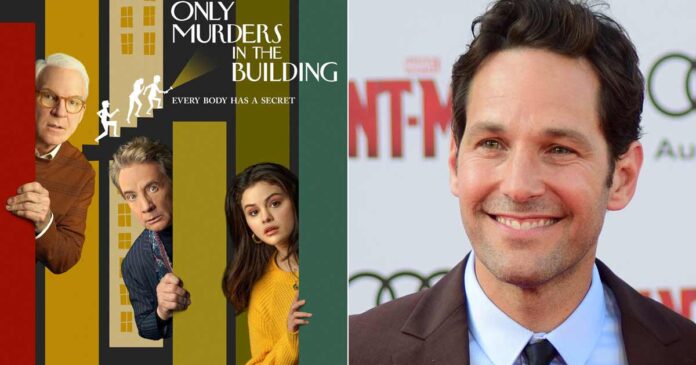 ‘Ant-Man’ star Paul Rudd has joined the cast of ‘Only Murders in the Building’. The actor will star in the show’s third season after making a cameo as Broadway star Ben Glenroy in Season 2 finale ‘I Know Who Did It’, reports ‘Variety’.

It is not known whether Rudd will appear in a series regular, recurring or guest capacity.

“Paul Rudd, after making an auspicious entrance into the world of our show at the end of Season 2 as Ben Glenroy, is someone we clearly want to know more about and see in our upcoming Season 3 — as he is a clear source of many upcoming questions and, as ever with our show, many twists yet to come!” series co-creator John Hoffman said in a statement to ‘Variety’.

‘Only Murders in the Building’ follows Charles (played by Steve Martin), Oliver (played by Martin Short) and Mabel (played by Selena Gomez), three unlikely friends who live in the same building in New York City and bond over their love of true crime, when they find themselves in the middle of a real-life murder mystery and begin a podcast of their own.

According to ‘Variety’, Season 2 sees them race to unmask the killer of Arconia Board President Bunny Folger (played by Jayne Houdyshell).

However, three (unfortunate) complications ensue — the trio is publicly implicated in Bunny’s homicide, they are now the subjects of a competing podcast and they have to deal with a bunch of New York neighbours who all think they committed murder. Season 3 was greenlit in July.

‘Variety’ adds that Martin co-created the series with Hoffman. Martin, Hoffman, Short and Gomez executive produce alongside Dan Fogelman, Jess Rosenthal and Jamie Babbit. Rudd’s new role in ‘Only Murders in the Building’ reunites him with Selena Gomez, as the two starred together in Netflix’s 2016 film ‘The Fundamentals of Caring’.

Must Read: Pete Davidson Was Forced To Stage A ‘Tacky’ Proposal To Kim Kardashian By Kris Jenner? Source Claims The Momager “Even Picked A Ring”