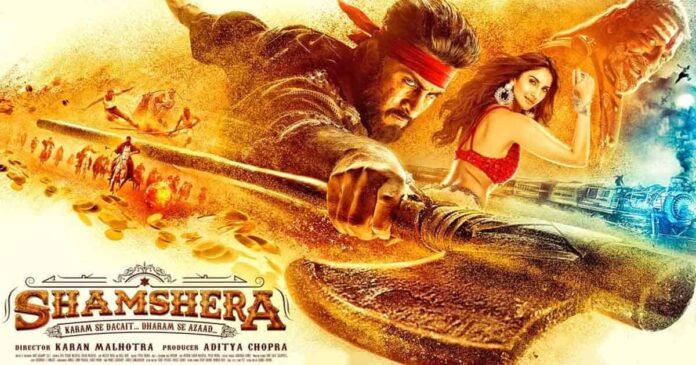 Shamshera Box Office Day 6 (Early Trends): After a disastrous opening at the box office, Ranbir Kapoor and Sanjay Dutt starrer had been on free fall throughout the week. Karan Malhotra’s period drama only managed to earn Rs 31.75 crores in three days.

A lot of expectations were associated with the film ever since the first look was released. Marketing and buzz around the film were also good. In fact, nearly 4000+ screens were allocated for the period drama but the film failed to impress the audience. Negative reviews and word of mouth seemingly impacted greatly the film’s business at the box office.

Reportedly, the Yash Raj film banner made Shamshera at Rs 150 crore but it seems the film may not be able to cover it through box office collections. As per the latest trade reports coming in, the film managed to bring in around Rs 1.50 – 2.10 crores. This means the total collection would now stand at Rs 39-39.60 crores.

The dwindling box office collections may even be stopped as maximum screens will be now allocated to Vikrant Rona and Ek Villian 2. The film is highly unlikely to get to the second week since the show’s cancellation is already begun.

Shamshera’s lifetime collection may not reach up to Rs 50 crores. At this rate, it is likely to touch Rs 40 crores this week. Now all hopes are on Ranbir’s other release Brahmastra which has been making headlines since 2014. A lot of expectation is associated with the film since Ranbir and his wife Alia Bhatt will be seen for the first time on screen.