Home Entertainment Who Is Lauren Spencer Smith? 5 Things To Know About The Singer...
Entertainment

Who Is Lauren Spencer Smith? 5 Things To Know About The Singer – Hollywood Life 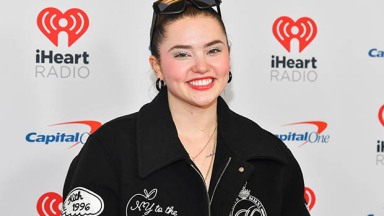 There are many up-and-coming singers making their mark today, but Lauren Spencer Smith, 19, just has that extra special twinkle. She is a Canadian singer and songwriter who was born in Portsmouth, United Kingdom but grew up in Vancouver Island. Below are five things to know about the brunette beauty who is set to perform at Dick Clark’s New Year’s Rockin’ Eve at the end of Dec. 2022.

Before Lauren was laying down tracks in the studio, she was singing her heart out on the American Idol stage in 2020. During the shows 18th season, Lauren was just 16 years old, and has since gained global fame for her music. “Vancouver Island is not too big of an island, not that many people,” she said during her audition for the show. “I feel like I’m a very little girl with a huge dream and that American Idol will help me achieve that dream in so many different ways.”

Country singer and American Idol judge Luke Bryan was even left speechless after hearing Lauren sing Pink‘s song “What About Us.” “Wow I can’t talk,” Luke said. “I think your voice is SUPER interesting. You have this tone that is making us very intrigued by you.” Later, Lauren ended up placing in the top 20 in the competition.

2. She Is A Taylor Swift Fan

Even though Lauren is a singer herself, she is often inspired by other talented musicians like Taylor Swift. On Oct. 24, 2022, the 19-year-old took to Instagram to share a video of herself doing a cover of Taylor’s song “Wildest Dreams,” which was first released in 2014. “1 year ago today, coincidence it’s a Taylor song and she just dropped her new album,” the star’s caption for the clip read. Her friends who are also singers were also seen singing in the clip, including Geena Fontanella and Leyla Blue.

3. Lauren Has A Boyfriend

The songstress also revealed she has a boyfriend on Nov. 26, 2022, despite releasing a breakup record that same month. “Me writing a Christmas song about being single but having a bf,” the clip read. She also added the Instagram caption, “I was single b4 tho but this is ironic.” Lauren tagged “@mattodelll” who was the guy embracing Lauren from behind in the adorable post.

Lauren only recently appeared on American Idol in 2020, but she’s already one of the most listened to artist on Spotify. “This years Spotify wrapped is crazy I’ve always kept my ones from previous years and it’s so cool to see how much it’s all grown and how much we’ve accomplished,” she captioned the celebratory post. “I love you guys so much you are all the reason I get to do what I do for a job and I couldn’t be more grateful for u all this year has been the craziest of them all I have no words other than thank you forever.” It’s important to note that, in 2020 Lauren’s number of streams were 5.4 million, and in 2022 that number grew to 464.3 million.

5. The Musician Is Up For Grammys Consideration

As if Lauren hasn’t impressed the world enough, she announced Oct. 19, 2022, that she was up for Grammys consideration in the coming year. “I’ve dreamt so many times as a little girl to one day be a singer and songwriter that was heard by more people than my mom in the living room or car,” her sweet caption began. “‘Fingers crossed’ was a turning point in my life I had been working so hard towards. From the help of so many friends, artists, producers, and writers I was able to finally discover what I wanted my sound to be as an artist.” Lauren is up for consideration for Best New Artist, Record of The Year, and Song of The Year.