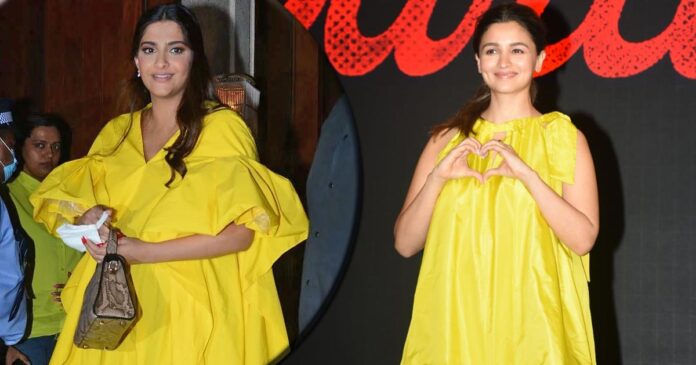 Mommy-to-be Alia Bhatt created her own sunshine earlier today as she made a bright appearance in a yellow dress at the trailer launch of Darlings. This is the first time that the actress is producing a film and seems really excited about it. While Alia is trending because of the film’s trailer, it’s her maternity wardrobe that’s winning the hearts on the internet and not to forget Sonam Kapoor donned a same pattern dress while flaunting her baby bump a while ago. Who do you think slayed yellow better? Scroll below to vote for your favorite.

Alia announced her pregnancy on June 27th with a cute picture of her lying on the bed while her husband Ranbir Kapoor was seen sitting next to her and looking at the monitor screen with a sonogram. She captioned the picture, “Our baby ….. coming soon.”

Talking about Sonam Kapoor, she announced her pregnancy with husband Anand Ahuja in March this year. She shared the good news on Instagram with a caption that read, “Four hands. To raise you the very best we can. Two hearts. That will beat in unison with yours, every step of the way. One family. Who will shower you with love and support. We can’t wait to welcome you. ❤️❤️❤️

Now, coming back to the fashion face-off, Alia Bhatt wore a bell-shaped yellow dress for the trailer launch of her film ‘Darlings’. She looked pretty as ever and styled her outfit with pink platform heels with her signature minimalistic makeup and messy ponytail.

While Sonam Kapoor wore a bright yellow maxi dress on a restaurant outing with her friends. The Neerja actress looked pretty as she styled her dress with white flats and subtle smokey eyes and loosely clenched hair with a middle parting.

Take a look at the fashion face-off here:

Alia Bhatt or Sonam Kapoor – who do you think slayed the maternity fashion with a yellow dress?

Must Read: Alia Bhatt Dons A Floral Oversized Dress Hiding Her Baby Bump At Darlings Promotions & Its Whopping Cost Could Get You An iPhone 14!