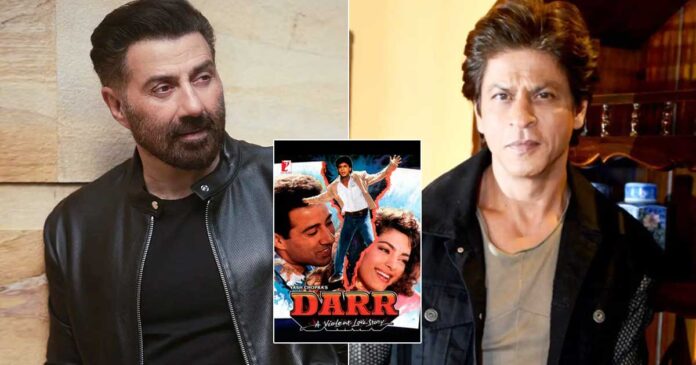 Sunny Deol was a superstar in the 90s. He happens to be veteran actor Dharmendra’s son and was massively popular back in the day and has given us some of the most incredible characters to remember him by. Sunny once did a film with legendary late director Yash Chopra titled ‘Darr’ opposite Shah Rukh Khan and it was a huge hit back then but do y’all know that he had disagreements with the late director and didn’t speak to SRK for 16 years post the film. Scroll below to read the scoop.

This is the same film, which made SRK a superstar overnight and also do you guys remember his iconic dialogue, “K-k-k-k-kiran,” yes, it’s that film only. It was when Sunny appeared on ‘Aap Ki Adalat’ and he recalled this memory while spilling some years old secrets about the film and director.

Sunny Deol apparently had a heated discussion regarding the climax of ‘Darr’ with Yash Chopra and said, “I had a heated discussion with Yash Chopra regarding that scene. I tried explaining that I am a commando officer in the film. My character is an expert and fit, then how can this boy beat me easily? He can beat me if I can’t see him. If he can stab me while I am looking at him, then I won’t be called a commando.”

Sunny Deol was so angry with Yash Chopra that he ripped his pants off in anger and said, “Soon, out of anger, I didn’t even realise that I had ripped my pants with my hands.”

Reportedly, post the film, Sunny and Shah Rukh Khan didn’t speak to each other for 16 years and Deol said, “It’s not that I didn’t talk but I just cut myself off and I anyway don’t socialise much. So we never met, toh baat karne ki baat he nahi hai.”

What are your thoughts on Sunny Deol not speaking to SRK for 16 years? Tell us in the comments below.

Must Read: Manoj Bajpayee Once Revealed Shah Rukh Khan Was ‘Always Very Popular With The Girls’: “We Used To Share Cigarettes, Beedis…”