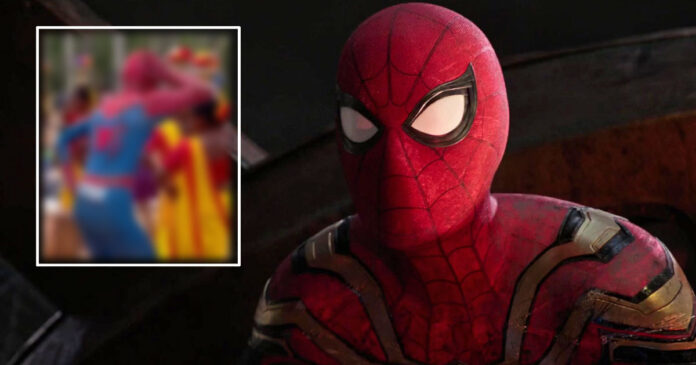 Spider-Man is among the most lovable characters in the Marvel Cinematic Universe and after the last release, No Way Home, things are looking hard for Peter Parker played by Tom Holland. Now that the studio is exploring the multiverse saga, seems like its effect has already started. A video of our friendly neighborhood superhero is going viral from the streets of West Bengal, where he’s seen dancing with the locals, leaving the internet in splits. Scroll below to read the whole scoop.

For the unversed, the character played by Tom was introduced in the MCU in Captain America: Civil War. He later went on to appear in Avengers: Infinity War, Avengers: Endgame and was even featured in solo films, Spider-Man: Homecoming, Spider-Man: Far From Home and Spider-Man: No Way Home.

Coming back to the topic, a man dressed up as Spider-Man and dancing to the tunes of the folk songs played by Santhali women is now going viral. The video was taken in West Bengal in Shantiniketan’s Sonajhuri. Sharing the video on Instagram, the page called Kolkata Illusion wrote, “@mrspider2014 is enjoying at Sonajhuri and vibing with shaotaal naach.”

The video has garnered a lot of views and over 4000 likes, reacting to the same, a user wrote, “Spiderman in chappal was epic,” another wrote, “Spider-Man get lost from home,” a third user wrote, “think its mr.spider.. who told news reporters, he came to multiverse, marvel studios,” a fourth user wrote, “RIP spiderman.”

Earlier when Allu Arjun starrer Pushpa was released, the film’s song Saami Saami featuring Rashmika Mandanna went viral. During the time, a person dressed as the same Marvel character performed the hook step of the song.

The video of Spider-Man dancing on Saami was shared by the actor’s brother Allu Sirish, and he wrote, “Spiderman celebrating his success dancing to ‘Rara Saami’ from Pushpa! As a fan of AA & Spidey.. Waah! Yeh India hain boss. @SpiderMan good job buddy!” Take a look at the video below:

Must Read: Joker 2 To Be Made At 2X The Budget Of OG Just To Afford Joaquin Phoenix & Lady Gaga?