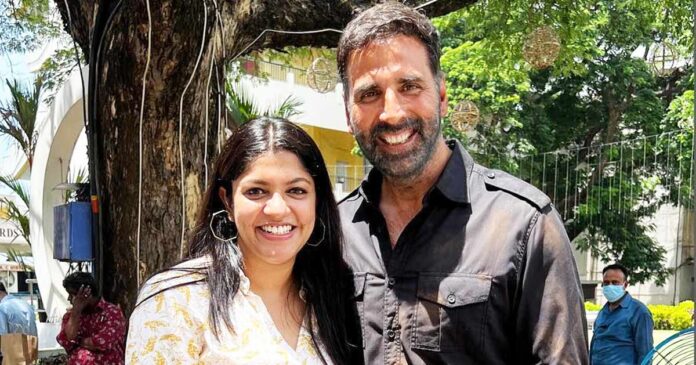 Actress Aparna Balamurali, who played the female lead opposite actor Suriya in director Sudha Kongara’s Tamil blockbuster ‘Soorarai Pottru’, is overwhelmed at having met Bollywood star Akshay Kumar, who is now playing the lead in the Hindi version of the film.

Taking to Twitter, Aparna said, “The feeling was overwhelming. Thank you Akshay Kumar sir for your time. For being such a joy!! It was a pleasure to see you become Veer.

Radhika Madan reprises Aparna’s role in the Hindi remake. Only last week Suriya had disclosed that he had called on the crew of the Hindi remake of ‘Soorarai Pottru’, which was partly inspired by events from the life of Air Deccan founder Captain G.R. Gopinath, and that he was playing a cameo in the Hindi version.

The Hindi version is being produced by Suriya’s production house 2D Entertainment, along with Abudantia Entertainment and Cape Good Films on a lavish scale.

Be a part of our community to get the latest Telugu, Tamil, Kannada, Malayalam film news & more. Stick to this space for the regular dosage of anything and everything entertainment! While you’re here, don’t hesitate to share your valuable feedback in the comments section.

“I Didn’t Really Want To Be Alive Anymore”