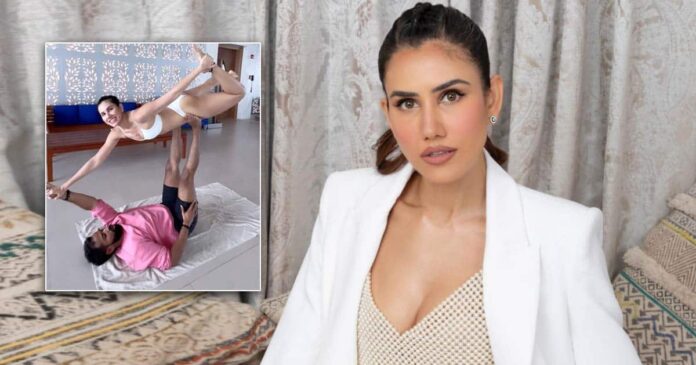 Sonnalli Seygall, the actress who entered Bollywood in the Kartik Aaryan-led Pyaar Ka Punchnama in 2011 is making the headlines today. Despite not having many film titles to her credit, the Jai Mummy Di is a noteworthy name on Instagram with a following of 1.4 million. The actress – who is an ardent Insta user, shared glimpses of her personal and professional life with her followers.

Doing the same again, Sonnalli shared a video of herself acing a yoga asana while attempting it with her trainer. Sharing it, she caption it “Monday done right with @sarvesh_shashi 🤍” In the video, the actress can be seen dressed in only a white br* and p*nty. And not it has received mixed reactions.

Complimenting Sonnalli Seygall acing the asana, Vardhan Puri commented on the video saying “wow kya baat hai yogini, you’re a pro yaara ❤️” Others also congratulated her by calling her ‘WonderWoman’ and dropping wow comments, hearts emojis and more. However, some took to the comments section and trolled the Pyaar Ka Punchnama actress regarding what she wore in the video.

Commenting on the instructor’s job and the pros & cons (though not really) he has with doing it, one wrote, “This instructor will get divorce tomorrow. 100% sure….😂😂” Another added, “Yeh job krni hai 😃😃,” while a third noted, “Bande ke maze hai boss 😁” Another joked, “Abba main instructor banunga…. Kamti paise milenge, lekin main khush rahunga”

What are your thoughts on Sonnalli Seygall’s outfit choice while doing yoga? Let us know in the comments below.