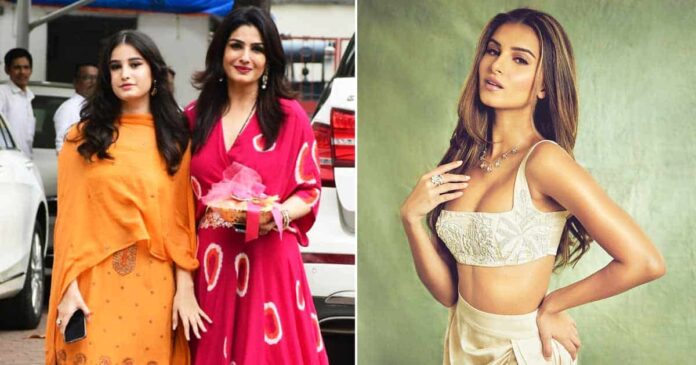 Bollywood actress Raveena Tandon was spotted outside Shilpa Shetty’s house with her daughter Rasha Thadani. The mother-daughter duo looked absolutely amazing, however, it was the netizens who pointed at the uncanny resemblance of Rasha with this Bollywood actress. Want to know whom? Scroll below to read.

Raveena and Rasha looked uber stylish in their ethnic wears. While the doting mommy wore a rose pink-coloured ethnic gown which she completed with a pair of jhumkas and wine lip shade, the daughter donned a yellow-coloured suit and accentuated her looks with dewy makeup and dainty earrings. They both posed for the paps.

As soon as the pictures and videos of Rasha Thadani and Raveena Tandon went viral, netizens have been bombarding the comment section of the posts mentioning that Rasha looks a lot like Tara Sutaria. Yes, that’s right! Check out the post below:

While one user wrote comparing Raveena Tandon’s daughter Rasha with Tara, “Tara sutaria 2.0 version”, another one commented, “Ye Tara sutaria jeise lagti hai kisi ne notice kiya ho to”. One of the netizens penned, Mini tara sutaria? Another one commented, “Tara Sutaria ki sasti copy”. On the other hand, a few of them trolled the celeb kid that she might have gone under the knives and said, “Maybe plastic surgery”. One of them wrote, “lips job karaya h isne”. A few even compared her with her mother Raveena, and lauded the celeb kid.

Raveena Tandon and Anil Thadani’s daughter, Rasha or Rashavishakha Thadani is an avid Instagram user and enjoys a massive fanbase. Even before stepping into the glitz and glamour world, her followers are very dedicated to her account.

What are your thoughts? Do you also think Rasha Thadani looks like young Tara Sutaria? Let us know!