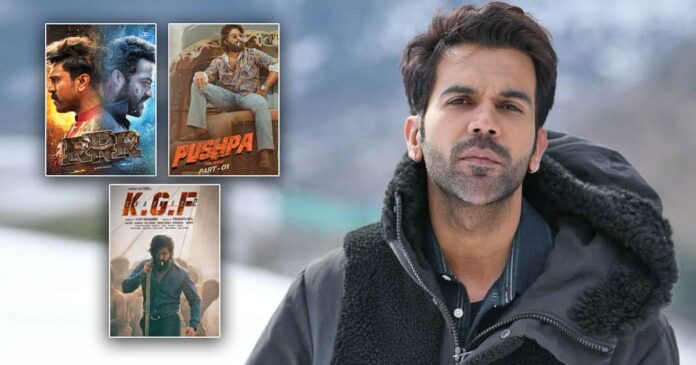 The recent blockbuster films like Pushpa, RRR and KGF Chapter 2 have sparked debate about South vs Hindi cinema among the masses. Many believe that Bollywood has nothing better to offer so the majority are watching South films. However, that’s not the case. In a recent interview, Rajkummar Rao shares his views on the same and talks about the formula behind making a hit film. He also spoke about nepotism.

Rao is currently gearing up for the release of Hit: the First Case opposite Sanya Malhotra. The thriller movie is the Hindi remake of the Telugu film of the same name and is scheduled to release on July 15, 2022.

In his recent appearance at India Today Conclave East 2022, Rajkummar Rao talks about the formula of making a hit film. He said, “No one knows the formula of a hit film, you have to keep trying and then leave it to destiny. I haven’t really thought about why South films are doing well, maybe because they are good films, the hard work shows.”

Talking about how storytelling has changed in the film industry, Rajkummar Rao says, “I believe cinema goes through phases, at one point we were shooting songs in Switzerland, then we started telling small-town stories, and now it is time for larger-than-life cinema that the South offers.”

“But, as an actor, I rather do films I can be proud of not, not necessarily something that is working. As long as my producers don’t lose money, I can keep telling stories. I would rather do films I will be proud of. I don’t want to be part of a herd. It is okay if my films don’t make Rs 100 crore at the box office,” Rao adds.

Further sharing his views on nepotism, Rajkummar Rao says, “Nepotism will always be there, but now there are many opportunities. I have friends who were my classmates but are getting recognition now, thanks to OTT platforms. Like Jaideep (Ahlawat) who did so well in Pataal Lok and Pratik (Gandhi) in Scam 1992. Nepotism will be there, but your work and talent will speak.”