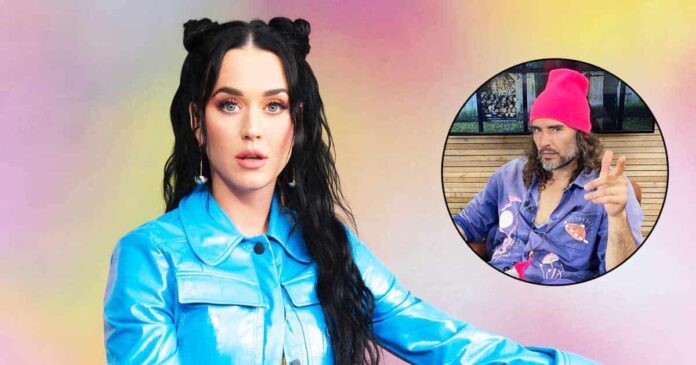 Singer Katy Perry once yelled and fled a studio after she saw a Russell Brand lookalike.

The 37-year-old singer was married to comedian Russell, 47, for a year from 2010 to 2011, and she reportedly freaked out when running into a man who looked like then-husband, reports aceshowbiz.com. It was a prank orchestrated by BBC Radio DJ Scott Mills.

Unaware that the couple Katy Perry and Russell Brand were having marriage problems, the radio host thought it would be hilarious to surprise Perry with a lookalike of her then-husband during an interview.

Speaking to The Sun newspaper, BBC Radio DJ Scott Mills said: “I thought it would be funny to hire a Russell Brand lookalike. I found a bloke who, when he turned up, really looked like Russell and could do the voice. So we sent fake Russell into the studio – and Katy Perry absolutely freaked out and ran.”

“We didn’t know they were having relationship troubles so it was a bit misjudged. But I remember hearing her saying, ‘I’m not going back out there,’ multiple times. I pleaded with her to come back. She’s wicked and did, but she said, ‘You need to play my records for the rest of your life on the radio to make up for it.’ It was my most awkward moment on Radio 1.”

Katy Perry and Russell Brand tied the knot in a lavish wedding in India in October 2010 but the comedian filed for divorce just one year later. Brand previously said, “I really tried in that relationship. I have nothing but positive feelings for her.”

However, Perry revealed that Brand told her via text that he was filing for divorce.

Katy Perry said, “He’s a very smart man, and I was in love with him when I married him. Let’s just say I haven’t heard from him since he texted me saying he was divorcing me December 31, 2011.”

Explaining the problems in their marriage, she said, “(He was) hysterical in some ways. Until he started making jokes about me and he didn’t know I was in the audience, because I had come to surprise him at one of his shows. So. Hysterical to a point.”

Katy Perry added, “I mean, I have to claim my own responsibility in things. I do admit that I was on the road a lot. Although I invited him time and time again, and I tried to come home as much as I possibly could. You saw that in the movie (Katy’s documentary) ‘Katy Perry, Part of Me’. That wasn’t edited to leave footage out – there wasn’t any footage of him.”

“At first when I met him, he wanted an equal, and I think a lot of times strong men do want an equal, but then they get that equal and they’re like, I can’t handle the equalness. He didn’t like the atmosphere of me being the boss on tour. So that was really hurtful, and it was very controlling, which was upsetting.”

“I felt a lot of responsibility for it ending, but then I found out the real truth, which I can’t necessarily disclose because I keep it locked in my safe for a rainy day. I let go and I was like, ‘This isn’t because of me; this is beyond me.’ So I have moved on from that,” Katy Perry concluded.

Must Read: Joker 2: Joaquin Phoenix & Team To Ditch The Iconic Staircase As Base Shifts To California For A Whopping Tax Credit – Reports