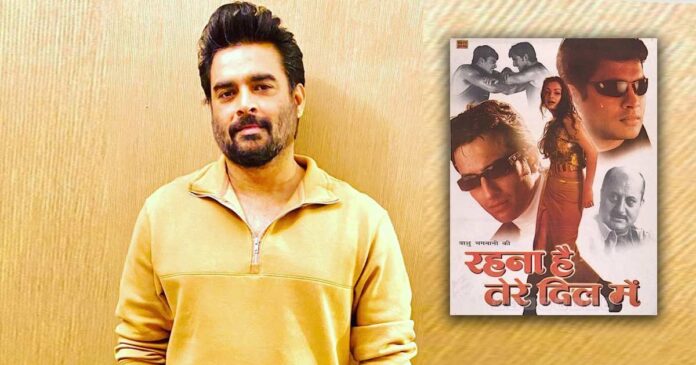 R Madhavan is ageing like a fine wine. The actor has become much more choosy about his scripts and with Rocketry: The Nambi Effect, he’s coming to theatres after a gap of 4 years. While he’s geared up for Rocketry, the actor recently addressed the reports about Rehnaa Hai Terre Dil Mein’s remake.

It’s quite surprising that upon its release in 2001, RHTDM didn’t do that well at the box office. In fact, the makers were highly disappointed with the performance of the film. However, the music was a chartbuster and the film eventually gained a cult following on television screenings. It’s one of the most loved romantic comedies among Indian youth and it sums up its popularity.

From the last few months, there have been reports stating that Rehnaa Hai Terre Dil Mein is all set to get a remake. R Madhavan addressed such a decision, if it’s official, by calling it foolishness. He feels the film shouldn’t be touched as it’s the same as remaking a cult film like 3 Idiots, though he wished the team (who all are remaking RHTDM) all the best.

While talking to Pinkvilla, R Madhavan said, “I think it’s foolishness, and that’s my opinion. I wouldn’t want to touch that. I wouldn’t do it as a producer. I wish them all the very best from the bottom of my heart, I do. And I hope they surprise, because nothing in the industry can actually be predicted but it has a lot of memories attached to it for a lot of people. For the audiences, it is more than a movie.” He added, “It is sort of an anthem in some ways. It’s like almost saying that 15 years from now you want to remake 3 Idiots. I don’t think it’s a sensible… let me just put it again – I think it’s a brave decision.”

On the work front, R Madhavan is looking forward to Rocketry: The Nambi Effect, which also marks his directorial debut. The film releases on 1st July 2022.

Must Read: Aditya Roy Kapur Opens Up On His Transformation In OM, “This Has Been My Most Physically Challenging Film To Date”