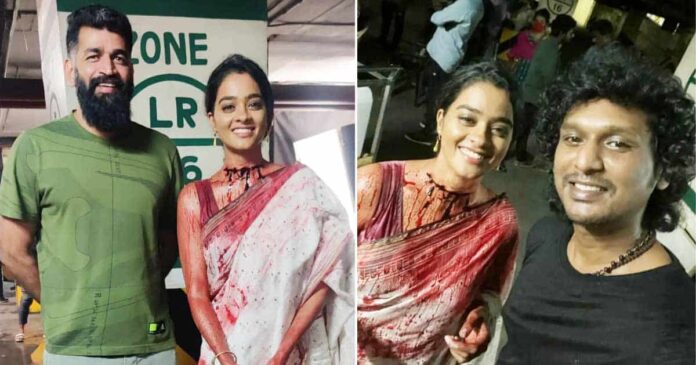 Actress Gayathrie, who played one of the important characters of director Lokesh Kanakaraj’s blockbuster ‘Vikram’, celebrated the film completing 100 days in theatres by sharing an interesting piece of information on her dying scene in the film.

Taking to Instagram, Gayathrie said: “When an actor performs a dying scene in a movie, it is customary to take a shot of them waking up and smiling at the camera. Somewhat like telling the universe that the scene was just acting and that the actor is alive and well.

“While shooting for my scene in ‘Vikram’ we forgot to take that shot. Pressed for time, we couldn’t move the lighting set up either. So, we got innovative and took these. To everybody asking, unga thala enga, Inga paarunga da!” Gayathrie added.

Gayathrie also shared a couple of pictures, one in which her face is covered and the next in which she is seen standing next to director Lokesh Kanagaraj of Vikram, sporting a smile.

Actor Kamal Haasan has also reacted with happiness to the news of Vikram featuring Gayathrie completing a 100-day run in theatres. On Saturday, he shared an audio clip, expressing his gratitude to fans for the film’s success.

Must Read: Kamal Haasan Reveals Mani Ratnam Has Won The Competition About Making Ponniyin Selvan Into A Film: “He Continuously Kept Making Efforts”