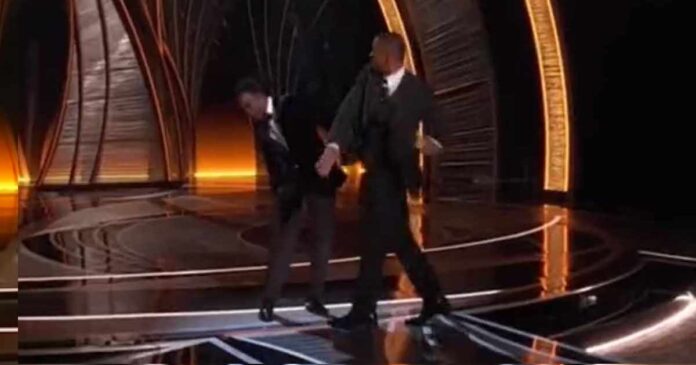 2022 has really been a year of controversies. But one of the biggest controversies would still be Will Smith slapping Chris Rock at Oscars 2022 which later turned into the biggest news of the year. Hollywood was divided into two parts, one favouring Will and the other against him for slapping the comedian on such a huge stage. Now, during a comic set during the PNC Bank Arts Centre in Holmdel, New Jersey, Rock addressed the ‘Slapgate controversy’ and opened up on the incident. Scroll below to read the scoop.

During the Oscars 2022, Rock cracked a joke on Smith’s wife Jada Pinkett Smith which didn’t go well with the actor who stood up, went on the stage and slapped him. The internet had started a memefest post the incident and netizens just couldn’t get enough of it.

Coming back to the topic, during his performance at the PNC Bank Arts Centre in Holmdel, New Jersey alongside Kevin Hart, Chris Rock addressed the Will Smith slapping controversy and said, “Anyone who says words hurt has never been punched in the face,” as reported by US Weekly.

Chris Rock also spoke about people being over-sensitive and playing a victim, he said, “I’m not a victim, motherf*cker. Yeah, that sh*t hurt, motherf*cker. But I shook that sh*t off and went to work the next day. I don’t go to the hospital for a papercut.”

Chris is clearly taking the high way here and his fans are all in to support the comedian.

What are your thoughts on Chris Rock addressing Will Smith slapping him during Oscars 2022? Tell us in the comments below.

Must Read: Will Smith’s Bad Boys 4 Is Very Much Happening Without Any Halt, Sony Pictures’ Chairman Says “I Know Him To Be A Good Person”