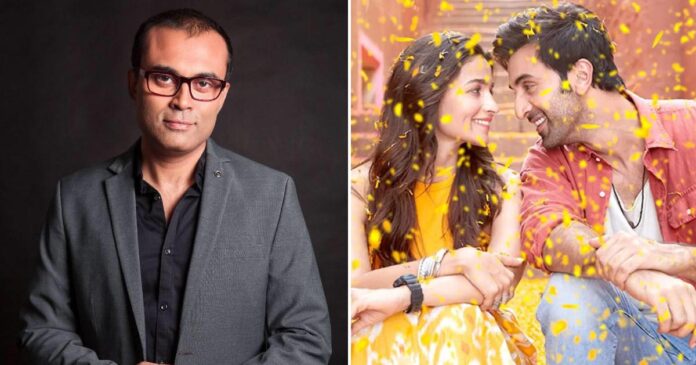 Ranbir Kapoor and Alia Bhatt starrer Brahmastra is one of the much-awaited films this year. A few weeks ago the makers released the full version of the much-awaited song ‘Kesariya’. Soon after the release, the song sung by Arjit Singh began receiving flak.

Several netizens took to social media and reacted to the song calling the words out of place and odd. Words like Love Storiyaan in the lyrics became fodder for memes on social media. A Twitter user even wrote, “A small piece of elaichi (cardamom) can ruin the entire biryani (a rice dish).” The song has been composed by Pritam with lyrics by Amitabh Bhattacharya.

The lyricist recently addressed the flak received for the Brahmastra song Kesariya. During a conversation with Film Companion, Amitabh Bhattacharya said, “The interesting part is that I came to know after almost 24 hours… Of all the words why is it (flak) coming on Love Storiyaan. It was unexpected. Earlier too, it has happened in my career that there were objections in some songs with respect to the thoughts, connotations or phrases. But here, it was very unexpected to draw flak on the phrase, Love Storiyaan. Also the magnitude of the flak, so much debate and chaos. Hashtags and memes were being made which I really enjoyed because for the first time people took out the time to create hashtags and memes on me.”

The lyricist also revealed why he chose the lyrics “Kaajal ki, siyaahi se likhi, hain tu ne jaane, kitnon ki love storiyaan” in the song. He explained that Ayan Mukerji’s film is a modern film and not a mythological film. The characters depicted in the film belong to this generation. Hence he used their lingo with a twist for a Hinglish word. Despite the flak, the National award-winning lyricist said, “we still like it that way.”

Further reacting to the criticism for Brahmastra song, Amitabh Bhattacharya said, “People have their own take. Just like when a song is appreciated and becomes popular, we do not ask, ‘Why me?’ So, now when you are being criticised, you should take it sportingly and that’s what we are doing…Is gaane pe I was also surprised ki usi ek shabd pe itna hungama kyu macha.”

For more updates on Bollywood, tune into Koimoi.

Must Read: Shehnaaz Gill Reacts To Reports Of Unfollowing Salman Khan & Removal From Kabhi Eid Kabhi Diwali: “These Rumours Are My Daily Dose Of Entertainment”