Home Lifestyle What is the tradition of celebrating Raksha Bandhan (Rakhi)?
Lifestyle

What is the tradition of celebrating Raksha Bandhan (Rakhi)? 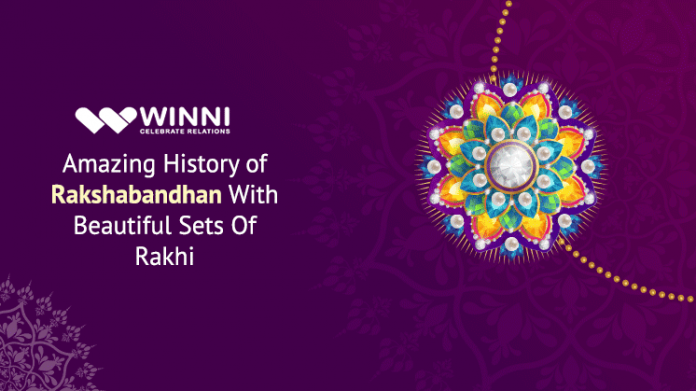 Raksha Bandhan is a happy celebration of the sentiments of tremendous love and admiration between brothers and sisters and infuses life into their connection. This sense of belonging that they have for one another is something that they both share. The festival of Rakhi, as it is also called, is celebrated by the exchange of a holy thread that symbolises the long-lasting tie between brothers and the existence of affection between them. This festival, which is celebrated on a full moon day in the month of Shravan, is renowned for its auspiciousness in reinvigorating your sibling connection and making it much more robust than it had previously been. On this day, sisters tie a thread or an amulet around the wrists of their brothers to bless them with a long and healthy life. In exchange, the brothers give the sisters a gift in appreciation. As a result of this thread, the brothers have been entrusted with their fair part of the responsibility of caring for and safeguarding their sisters throughout their lives.

What activities are planned to commemorate the occasion?

It is a massive event in India, and it is celebrated worldwide on Raksha Bandhan, the festival of the union. It’s all about the feelings, promises, and joy shared amongst friends and family members. Several days before the actual date of the festival, the preparations for the event begin. To add excitement and glitter to the celebration of Rakhi, the local marketplaces are inundated with a range of gorgeous Rakhis as well as other gift goods, such as chocolates. Women undertake shopping sprees for ethnic wear in preparation for Raksha Bandhan. The day of Raksha Bandhan begins with the sisters having a bath in the early morning hours, getting ready, and then giving their prayers to God in the evening. On Rakhi Purnima or Raksha Bandhan, the Rakhi ritual is generally performed during the auspicious Muhurat of Aparhna or Pradosh, which is considered the most crucial auspicious time of the year. Aarti is performed for their brothers once the Puja is completed. The sisters also apply kumkum and rice to their brothers’ foreheads and tie Rakhi around their wrists while reciting hymns and praying for their well-being. To add sweetness to the Rakhi festivities, they sweeten the lips of their brothers with treats. Rakhi presents such as money, electronics, feminine accessories, clothes, and many other items are given to sisters as a token of appreciation. The brothers also vow to care for and support their sisters throughout their lives, no matter what happens to them. Following the ritual, the entire family joins in on the Rakhi festivities, indulging in the delectable food and sweets that are served. Send Rakhi online to USA to keep the bond stronger with your brother.

Rakhi is being celebrated all over India.

India is a well-known country around the world because of the diversity of its culture and traditions. The holidays in this country are huge events that are filled with adrenaline and happiness. Because India is divided into several states, each state has its own culture and traditions, resulting in festivities unique to that state. As is the case with the festival of Raksha Bandhan, the day of Rakhi Purnima is considered to be highly auspicious for performing many rites in the Hindu religion, including the exchange of Rakhi. Aside from the traditional Rakhi tying ritual that is done on this day, there are various customs and traditions observed by a diaspora of people who are all commemorating this day in their manner.

Raksha Bandhan in North India: The Rakhi festival is another manifestation of the rich culture and customs of the areas of North India that include Haryana, Punjab, Uttar Pradesh, Rajasthan, and other states, as well as other parts of the world. The holiday is conventionally observed in these states, with a Rakhi tying ceremony conducted by sisters and brothers.

In the state of Haryana: the festival of Raksha Bandhan is celebrated as a “salon,” in which the priests of the temples tie an amulet around the wrists of the individuals who attend. However, the traditional ritual of tying the Rakhi is also celebrated in this region on Rakhi Purnima. Still, the event mentioned above is the primary attraction of this state on this day.

Easter in East India: As a result of the enormous differences within India’s multilingual culture, the holidays in India have taken on new forms and expressions. When it comes to the states of Odisha and West Bengal, the day of Raksha Bandhan is observed as a Jhulan Purnima, during which people give their prayers to Lord Krishna and his consort Radha. Occasionally, women may tie Rakhis around the wrists of their brothers to deepen their relationship with them and to wish them a long and happy life. All of the cities in these states are swept up in the merriment of this event, and people can be seen joyfully partaking in the festivities across the city.

Raksha Bandhan is being celebrated in a more contemporary manner Raksha Bandhan is more than simply an auspicious day to commemorate the bond of siblinghood; it has a deeper meaning. When it comes to Rakhi threads, they have a unique significance; they are more than simply threads; they are strings that link the hearts of two people who have devout thoughts for one another. The event is no longer restricted to siblings related by blood, and it has achieved far more success than that. It might include any person with whom you have an excellent relationship and friendship in your celebration. The delicate nature of the online Rakhi gifts and thread represents the delicate nature of relationships, which must be treated with respect and irrigated with love regularly. One of the primary goals of this event is to bring individuals closer together who do not have romantic connections with one another but desire to remain connected throughout their lives, much like siblings do.