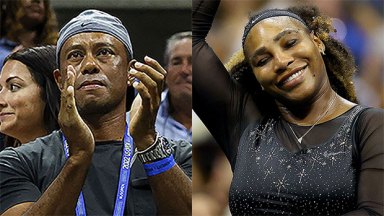 Serena Williams, 40, played her second-round US Open match on August 31 fresh off announcing she’s retiring — and many famous faces were in the crowd. Legendary pro golfer Tiger Woods, 46, made a rare appearance at the tennis match along with his girlfriend Erica Herman, 37, as the duo cheered her on. The famous athlete looked like he had a great time as he was all-smiles at multiple points in the event, also standing to clap for Serena at one point.

Tiger attending the match is no surprise as he and Serena have been close friends for years. The younger Williams sister even mentioned Tiger in a personal essay about her plans to “evolve” away from the sport in Vogue earlier this month. “I said, ‘I don’t know what to do: I think I’m over it, but maybe I’m not over [tennis],’” She wrote. “He’s Tiger, and he was adamant that I be a beast the same way he is! He said, ‘Serena, what if you just gave it two weeks? You don’t have to commit to anything. You just go out on the court every day for two weeks and give it your all and see what happens.’ I said, ‘All right, I think I can do that.’”

And although many are calling it retirement, the pro tennis player has been adamant that she is not a fan of that word. “I have never liked the word retirement. It doesn’t feel like a modern word to me. I’ve been thinking of this as a transition, but I want to be sensitive about how I use that word, which means something very specific and important to a community of people,” Serena wrote. The decades-long player added, “Maybe the best word to describe what I’m up to is evolution. I’m here to tell you that I’m evolving away from tennis, toward other things that are important to me.”

During the match on Wednesday, the legendary athlete proved that she is still the G.O.A.T, as she won against Estonia’s Anett Kontaveit in a 6-2 victory. Serena will move onto the third round of the US Open tomorrow. And not only will she be moving onto the third round, she is set to begin women’s doubles with her sister, Venus Williams, 42, on Sept. 1.