Home Entertainment Pete Davidson Kisses Kim Kardashian As She Sits On His Lap At...
Entertainment 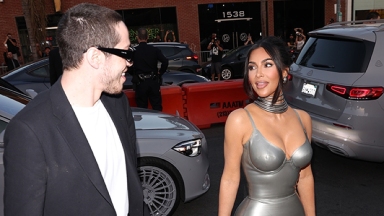 More “Kete” content! Kim Kardashian, 41, posted new footage on April 27 of her and Pete Davidson, 28, engaging in PDA during their post-The Kardashians premiere dinner date on April 7. The video, which Kim shared to her Instagram Stories, featured the Saturday Night Live comedian leaning in to give the SKIMS founder a romantic kiss on the lips. The couple lovingly wrapped their arms around each other as Kim sat on Pete’s lap in the booth of the restaurant.

The footage of Kim and Pete kissing should look familiar to fans. It’s actually a live video from the same dinner date where Pete kissed his girlfriend’s neck after they attended the premiere of her family’s new Hulu reality show. While Pete didn’t walk the red carpet with Kim, he was photographed arriving to the event by his woman’s side, and then they left together to grab a bite to eat.

For the premiere and the dinner, Kim wore a metallic silver Thierry Mugler gown with matching necklaces and bracelets. Pete, meanwhile, wore a blazer to the premiere but removed it at the restaurant and just sported a plain white t-shirt. The couple showed their affection for one another after enjoying pizzas and Diet Coke. Kim shared the photo from the pair’s dinner date on April 11 and wrote in her caption, “late night snack.”

As far as the live video goes, Kim shared the romantic footage to prove that she didn’t use photoshop on her boyfriend in the original photo. Fans believed that Pete’s chin looked different and accused Kim of altering the footage, which she denied. “How do you photoshop a live photo? Asking for a friend…” she wrote on her Instagram Stories.

Kim also denied photoshopping her bellybutton in other photos on her Instagram Stories. She did, however, admit to photoshopping her niece True Thompson in place of Stormi Webster from a past family trip to Disneyland.