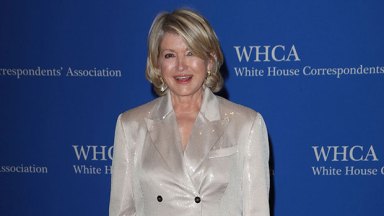 Martha Stewart will forever be a part of the “in crowd.” The 80-year-old lifestyle guru was spotted rubbing elbows with Hollywood’s It couple, Kim Kardashian and Pete Davidson, at the White House Correspondents’ Dinner on Saturday, April 30. Rocking a shimmering white jacket and black pants, Martha took to her Instagram to share a snap with the famous pair, who were also dressed to the nines for the prestigious affair.

“We are at the washington correspondents dinner kim @kimkardashian and pete @petedavidson.93 and i said our hellos while we await the president of the united states!” Martha captioned the amazing photo. “President Biden is due shortly to address about 2600 journalists and @trevornoah is the master of ceremonies. By the way President Biden delivered a fabulous comic speech and host @trevornoah was utterly spot on and terrific.”

The trio joined a slew of other celebrities at the dinner — including Drew Barrymore, Michael Keaton and Billy Eichner — where host Trevor Noah took some hilarious jabs at President Joe Biden and at Pete himself. After teasing the audience for showing up to “the nation’s most distinguished superspreader event,” Trevor continued to call out the idea of holding a massive indoor gathering in COVID times. “I mean, Dr. Fauci dropped out! That should have been a pretty big sign! Fauci thought it was too dangerous to come tonight!” he said of the top infectious disease expert, before adding, “Pete Davidson thinks its ok. And we all went with Pete. Ok. Alright.” Watch above.

It appeared all in good fun, which was certainly the vibe Pete was going for when he arrived at the fete with Kim by his side. The adorable couple were all smiles — and all over each other — on the red carpet. Check out the pics here!

Producers of the WH Correspondents’ Dinner were hoping to bring back the glitz and glamour to the event with the likes of Pete, Kim, Martha, Drew etc. The show even had pre-taped skits provided by Late Late Show host James Corden. Dubbed the “Nerd Prom,” it also featured an after-party hosted by Paramount and two brunches hosted by Politico and CNN on Sunday.