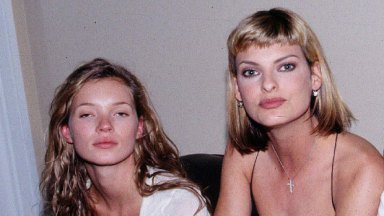 Linda Evangelista, 57, took to Instagram on Sept. 12 to share an iconic photo with Kate Moss, 48, as the two legendary models reunited at Fendi’s New York Fashion Week show. Linda captioned the post, “Fendi BTS.” And not only was Linda hanging out with old model friends, but she also posed with Kim Kardashian, 41, at the Monday fashion show.

In the behind the scenes snapshot, Linda wore a Fendi floor-length gown in a Tiffany Blue hue, silver gloves, and a stylish matching silver purse. The Canadian model wore her brunette locks slick back in an elegant updo for the legendary moment. Beneath the gorgeous gown, Linda wore matching blue high-heels to complete the high-fashion ensemble. Kate on the other hand was pictured in a white gown, but Linda’s photo did not showcase her complete look.

This year’s NYFW marks a very important moment for Linda, as it is her first runway appearance in 15 years! She also has not appeared in magazine photoshoots in six years due to claims that a fat-freezing procedure “disfigured” her appearance, according to The Daily Mail. However, on July 16, Linda showed off her first major photoshoot with Fendi on her Instagram. Linda wore three pink silk ball caps for the stunning photo, and posed with famous Fendi baguette bags. And we must say, the queen of the runway is definitely back!

Linda’s beautiful return to the runway also comes nearly one year after she came forward about a cosmetic procedure gone wrong. On Sept. 22, 2021, the 5′ 10″ beauty took to Instagram to reveal the shocking botched procedure that left her looking different than before the treatment was done. “Today I took a big step towards righting a wrong that I have suffered and have kept to myself for over five years. To my followers who have wondered why I have not been working while my peers’ careers have been thriving, the reason is that I was brutally disfigured by Zeltiq’s CoolSculpting procedure,” she wrote in the statement, adding, “[It] did the opposite of what it promised. It increased, not decreased, my fat cells and left me permanently deformed even after undergoing two painful, unsuccessful corrective surgeries. I have been left, as the media described, ‘unrecognizable.’”

The Visionaire 63: Forever co-author rose to fame in the 1990s and one of the world’s most top supermodels. Not only is she one of the most recognized faces in the industry, she has also graced the cover of over 700 magazines! Along with Kate, Linda has gone down in history as one of the most talented supermodels to date. She is also a mother to a single child, Augustin James Evangelista, who is 15 years old. He is the only son of Linda and François-Henri Pinault, 60, who is also married to actress Salma Hayek, 56.

Kate Moss’ Husband: Everything To Know About Her Ex Jamie Hince & Current BF