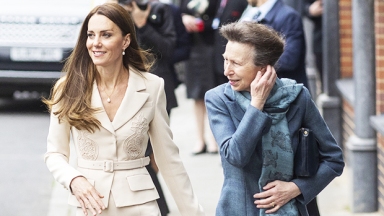 Duchess of Cambridge Kate Middleton, 40, stepped out smiling in London during her first joint royal effort with Princess Anne, 71, on Wednesday, April 27. The pair teamed up to support the Royal College of Midwives (RCM) and the Royal College of Obstetricians and Gynecologists (RCOG) and to learn about how they are collaborating to improve maternal healthcare. Kate beamed during the outing, wearing a cream blazer and skirt set from Self Portrait. She walked with confidence as she entered the organizations’ headquarters alongside Anne, the only daughter of Queen Elizabeth, who donned a teal dress and matching printed scarf.

Princess Anne has been Patron of the RCM for two decades and Kate became Patron of RCOG in 2018. Kate took over the role as the second-ever Patron, succeeding Her Majesty Queen Elizabeth The Queen Mother. At the time, she also launched the 2020 Nursing Now campaign, a three-year campaign that had the goal of improving public health “by raising the profile and status of nursing worldwide,” per the World Health Organization.

While Kate and Anne have certainly crossed paths during family gatherings, as she is her husband, Prince William’s, aunt, the new professional step in their relationship may signify Kate’s evolving role within the royal family. Furthermore, it sounds as if that Queen Elizabeth advocated for the collaboration herself. “The Queen was saying, ‘You do really need to work together, that is what the monarchy is about,’” Russell Myers, the Daily Mirror’s royal editor, claimed on the ‘Pod Save the Queen’ podcast (via Express). “‘Helping each other to present and publicize your causes, because that is the only way that they are going to survive.’”

Meanwhile, on Twitter, fans were thrilled to see Kate branching out and taking care of more business independent of Prince William. “Seeing The Princess Royal and The Duchess of Cambridge together is a delight. … They represent to the perfection the value of service in The Monarchy,” one supporter wrote. “Hope to see more joint engagements in the future, love these two,” another added, with several more sharing similar sentiments.

Kate has made maternity and early childhood care a focus in her work, using her own experiences with motherhood as an underlying inspiration. In a 2020 episode of the ‘Happy Mum, Happy Baby’ podcast, she noted that she always made it a priority to learn as much as she could as an expectant mother who was battling hyperemesis gravidarum, which is severe morning sickness. She revealed one of the things she learned was how to control her breathing and to meditate to help alleviate her symptoms. “It was through hyperemesis that I really realized the power of the mind over the body because I really had to try everything and everything to try and help me through it,” she recalled.

Prince Charles Grandchildren: Meet His 5 Grandkids, From George To Lilibet