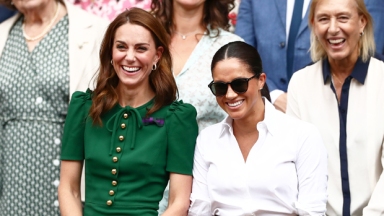 In the book The Palace Papers, which was released on April 26, author Tina Brown talks about the “long and hard” work Kate Middleton apparently did to become a “style icon” and how bothered she was when the media began to criticize her wardrobe as soon as her now sister-in-law Meghan Markle‘s fashion got its own spotlight. Brown says the epic outfits the 40-year-old Duchess of Cambridge, who married Prince William in 2011, became known for were “tastefully inexpensive” and signaled “solidarity with working women,” but when outlets, including The Sun, suddenly said she went “from fab to drab,” it was hard for her to not feel “demoralized.”

“Tell me any woman who wouldn’t feel demoralized opening a newspaper—even if it’s The Sun—to read a headline such as ‘Kate Middleton Has Gone from Fab to Drab in the Royal Style Stakes.’ The phone lines from Anmer to Coach Carole at Bucklebury must have been burning up,” Brown wrote in a section of her book, which provides an inside look into the British royal family’s drama since the death of Princess Diana in 1997.

“Kate had worked long and hard for her status as style icon, despite the inhibitions imposed by Palace killjoys,” Brown continued to write. “She had ascended alongside the millennial rejection of elitist haute couture and spent the best part of a decade wearing a tastefully inexpensive wardrobe, subsuming her personal views and signaling solidarity with working women. It took her five years after her marriage to pose for an unusually sedate cover of British Vogue wearing the kind of conservative brown suede Burberry coat and large vintage hat seen in the crowds of the Cheltenham Horse Show. She put on pantyhose both literally and figuratively, smiling gamely and uncomplainingly for the press.”

Brown then compared Kate’s carefully crafted fashion with that of Meghan’s, who as an actress, came from a background of all kinds of various wardrobe styles, including sexy and laid back looks. She mentioned her 2017 Vanity Fair cover shoot specifically, when the soon-to-be Duchess of Sussex at the time, was being spotlighted for her private relationship with Prince Harry, just two months before they announced their engagement.

“Inside pages of Meghan’s Vanity Fair cover story showed her not only without pantyhose, but barefoot in a strapless tulle Carolina Herrera bustier gown,” Brown wrote. “It was the same story for the daytime engagement shot.”

In addition to Kate and Meghan’s supposed style rivalry, Brown talks about other interesting claims in her new book, including how Meghan and Harry were apparently “infatuated” with each other from the start of their romance. The book says that one of the reasons Harry took a special interest in Meghan was because he was used to dating women from a “narrow circle,” but she “was of a breed he had not encountered.” Her independence was something that apparently really impressed him. “Harry was fired up not only by Meghan’s beauty and poise, but also by the way she was in control of her own life,” Brown wrote.

The Palace Papers is in stores and available online now.