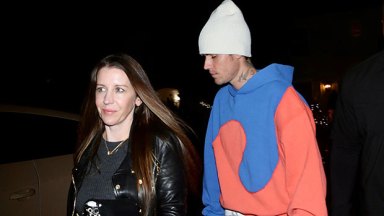 Justin Bieber, 28, and Pattie Mallette, 47, were spotted on a rare outing together this week. The singer and the his mom were headed to a church in Los Angeles, CA when they were photographed walking near each other outside. He wore a turquoise and light red hoodie, gray sweatpants, gray and white sneakers, and a white knit hat during the outing, and she wore a black leather jacket, jeans, and black boots.

At one point, Justin walked behind Pattie and they both appeared relaxed and content. She had her hair down and carried a purse that matched her jacket. It’s unclear if anyone else joined them for the service but it’s the first time they’ve been seen out together in public for a while.

Before Justin’s latest outing with his mom, he was seen on an outing with his younger brother, Jaxon, 12, who is the son of his father Jeremy Bieber. The siblings were getting coffee in L.A.’s Larchmont neighborhood and both wore matching black puffer coats. Justin put his hand on Jaxon’s shoulder at one point, showing off their close bond.

When Justin’s not hanging out with just his mom or siblings, he’s hanging with his wife, Hailey Bieber. The lovebirds, who were married in 2018, are often seen at events or on casual outings in L.A. and beyond, and also show off their love on social media whenever they can. They recently posed for cute pics while sitting on a plane together and the “Baby” singer shared them in an Instagram post he captioned with several red heart emojis.

The husband and wife also dressed to impress to enjoy a dinner at Nobu restaurant on Nov. 29. They were joined by Kendall Jenner and showed off PDA by holding hands. Hailey looked incredible in a red dress and Justin went for a more stylish casual look that included a hoodie and jeans.