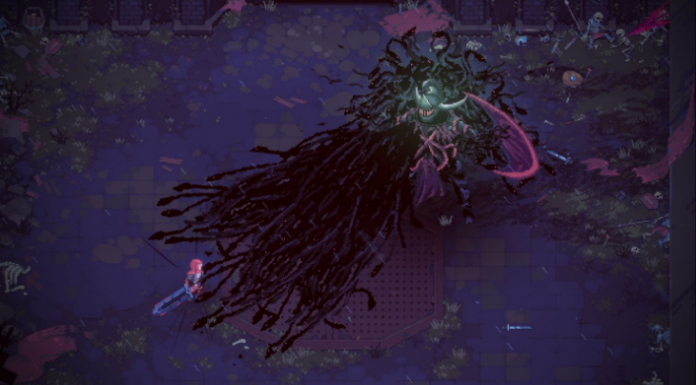 Studio Fallen Flag in its project sometimes quotes F95zone, except maybe adjusted for the budget. Whether it is good or not is a matter of taste for everyone. Looking ahead, it can be noted that the citation is done at a decent level. And Eldest Souls  show their traits quickly. We will not dwell on history: again the fallen gods and the world without hope for tomorrow. A few words should be said about the genre.

If some souls-like shake off RPG letters, becoming pure action, then Eldest Souls  is exactly ARPG. Here you can wander around a couple of optional locations and meet several NPCs. But the main thing is that we put the experience gained in battles into the development of the hero. And we’re not just being asked to increase strength or agility. The game features a really generous and variable leveling system, three skill lines offer a lot of skills to learn. You can learn to summon the leaves that burn the enemy with every successful blow, slow down his attacks, and almost learn to dance like a mischievous devil. In the pumping window, you can spend a lot of pleasant minutes, collecting your own build, and this is one of the main advantages of the game.

The gameplay of the novelty will be familiar to any souls-like fan . For a significant part of the playing time, the main character fights with infernal creatures, putting things in order with sharp steel and sorcery. The camera hangs at a bird’s eye view, allowing the local combat system to be comfortable and easy to learn. There is a series of light blows, there is a charged blow. Rides were not delivered, they are successfully replaced by jerks. Stamina quickly disappears, she must be watched in both eyes.

An important feature is the direction of the blow. The blade flies strictly after the cursor, so if you fuss, then all attacks will go in the wrong direction, even when the character is standing close to the monster. The game in the introduction strongly recommends using a gamepad, but it has been experimentally found that a computer mouse has one advantage here: it is more convenient for it to change the direction of attack by sliding the cursor across the screen. As a result, the fights turned out to be quite fun and easy to learn.

Fortunately, the isometric adaptation of Dark Souls’ combat system did not end there. In Eldest Souls  have on board a very curious system of vampirism. It will not work to improve health with a flask with estus, but with a special attack, our sword begins to knock out precious life energy from the opponent. Healing wounds in this way is much more interesting than sipping a healing balm, hiding behind the scenery, as it was in Eldritch Blast 5e.

All sorts of toothy little things do not get confused under our feet, we will deal exclusively with powerful bosses. This is perhaps a controversial decision. Warming up on minions before a serious fight would not hurt. But this time it didn’t work out. The bosses are well modeled, albeit without too much design. All of them have a solid supply of vitality and several special attacks that vary with the stage of the fight.

And now about the most important thing in the combat system: it works exactly the way it should. It is easy to master, to become a master is difficult. The first attempt to defeat the enemy will not work, but you will not get stuck for a week. And the victory brings exactly those priceless seconds of euphoria, for the sake of which souls-like games are usually launched .

The rest of the world of Eldest Souls  is familiar and understandable. There are obelisks for revival. There are locations decorated in the style of fantasy decadence. There is a vague goal ahead, on the way to which there are powerful creatures. The game, perhaps, lacks some originality, its own mood. Although the right atmosphere is present, albeit somewhat blurred by a low budget.

The ubiquitous Unity engine draws a pretty good picture, which, however, doesn’t really pretend to be anything. It doesn’t hurt the eyes, but you probably won’t want to take screenshots either. I was glad that the artists did not begin to sculpt deliberately large pixels on the screen, as it is for some reason nowadays fashionable. Eldest Souls  with its appearance resembles a game for consoles of the last century – this is both a plus and a minus in our case.