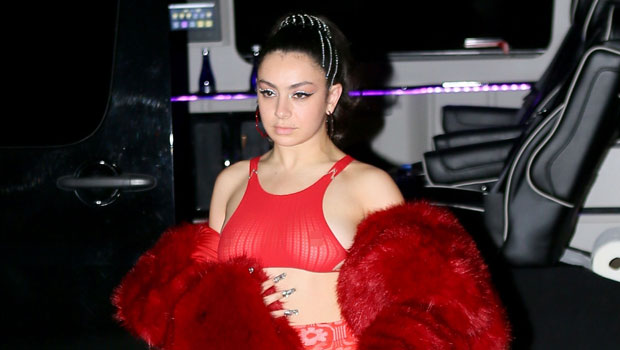 Charli XCX, 29, knows how to make a lasting impression and that’s exactly what she did on Saturday! The singer finished her epic show, which was for her Crash the Live Tour, at Manhattan Center in New York City, and then posed for eye-catching photos in a stylish and sexy outfit. It included a sheer red crop top and long matching velvet skirt as well as a burgundy fur wrap around her body and arms.

The beauty also rocked red heels and had her dark hair partly up with a diamond hairpiece. She topped off her epic look with flattering makeup detail that included sparkly silver eyeshadow. Her nails were also super long and appeared to be painted silver.

When Charli’s not making headlines with her music and fashion, she’s doing so by being open about important issues like her mental health. The talented star recently talked to Apple Music about her struggles and “feeling under pressure” when it comes to her work.

“I was just feeling very under pressure from work, from literally everything. I felt very uninspired by music and really was struggling with that,” she said before talking about her new album, Crash. “I don’t think I could have made this album at any other point in time, because I think I needed all of the running, numbing, experiencing the different sides of the music that I can create and the industry to arrive at this album.”

“I don’t think I could have made it if I’d been completely looking after myself all the time. Because it’s a very destructive album,” she continued. “People do fall out of relationships, people do lose friends, et cetera. And that’s really happened on many levels for me doing this album. I like that with pop music the listener can apply the meaning to their own life and experience grief or a breakup or love in their own way and apply it to their personal situation.”

Crash came out on March 18, 2022 and Charli’s Crash the Live Tour started shortly after on March 26.