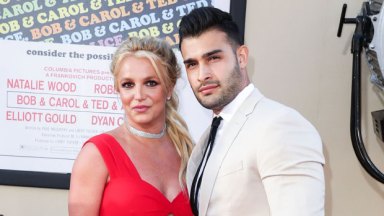 Britney Spears certainly seems to be living her best life after announcing both her engagement and pregnancy with Sam Asghari. The pop princess was all smiles in a video shared by her fiancé to his Instagram on Thursday (April 28). The couple were enjoying a hike along the coast as they stopped to take in the gorgeous surroundings, with Britney rocking a hoodie and Sam in a tank top. “Beautiful day today,” the actor captioned the clip.

The adorable couple love letting their fans see what a happy life they lead, especially since her restrictive conservatorship ended. Recently, Britney showed off their amazing romance when she posted a clip of them dancing and packing on the PDA. “Thank you baby for always reminding me what life is about … Joy, laughter, and living… My experience was a woman’s dream,” the “Gimme More” singer, 40, captioned the video. Sam, 28, commented, “My life is a man’s dream.” Too cute!

Meanwhile, Britney’s ex Justin Timberlake recently made headlines after her music director for 2002’s “Overprotected” video claimed she was dumped by the singer over text.  Chris Applebaum took to his Instagram on April 22 to share a photo from the shoot and offer details on the alleged incident. ““We sat on the floor of her trailer for a minute, talked it out, and then rallied,” he said about the moments after she received the breakup text. “I told her she should get out there & show Justin he made the biggest mistake of his life.”

While Britney and Justin’s three-year relationship between 1999 and 2002 has been fodder for fans — as the duo ruled the pop music world as one of the hottest couples at the time — the details on how the split went down has yet to be revealed. With the “Toxic” singer being at the height of her early career and Justin basking in the glory of his boy band days in NSYNC, the surprise breakup caused a quite a lot of speculation, including cheating rumors of Britney stepping out with choreographer Wade Robson. Justin’s single “Cry Me a River,” released shortly after the split, didn’t help the gossip, as the lyrics involved a tumultuous relationship.

A day before Chris’ Instagram reveal, Britney got candid about the relationship that followed her breakup with Justin. Taking to her own social media account in a since-deleted post, the pop princess dropped a bomb, claiming her ex-husband Kevin Federline refused to see her while she was carrying his baby!

Britney Spears’ Romantic History: From Dating Justin Timberlake To Having A Baby With Sam Asghari