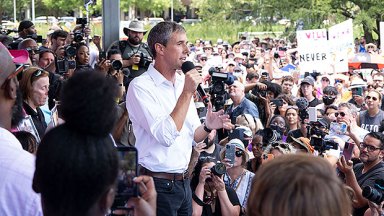 Following a reported second shooting in the town of Uvalde, Texas — the same town as the deadly Robb Elementary School shooting on May 24 — Democratic candidate for Texas Governor Beto O’Rourke took to Twitter to react. “We don’t have to accept this as our reality,” Beto, 49, wrote on Thursday, September 8.  “The 21 families in Uvalde have told us how to reduce gun violence, but we need a governor who will follow their lead.”

We don’t have to accept this as our reality.

The 21 families in Uvalde have told us how to reduce gun violence, but we need a governor who will follow their lead. https://t.co/FXD0CYB5ad

The tweet was in response to an earlier tweet by Texas network WFAA, reading, “BREAKING: #Uvalde Police said they are investigating a shooting with injured victims. No other details were released.” According to a statement posted on the Uvalde Police Dept Facebook page, police were dispatched to Uvalde Memorial Park “in reference to a shooting.” Two juveniles were reportedly being treated at nearby hospitals. The latest update, posted at 8:46 PM, read in part, “Uvalde Detectives currently have 4 suspects in custody and being questioned about the shooting.”

Many of O’Rourke’s 2.5 million followers on the social media platform took to the comments thread to sound off. “Please Beto, I want you to win this #Roevember 08th!” commented a follower, referring to the overturn of Roe V. Wade in June. “The whole Texas/World needs you more.” “If I lived in Texas, my home state, I would vote for you,” commented another.

The most recent Uvalde shooting news comes after the deadly shooting spree that ended in the deaths of 19 students and two teachers. The gunman, 18-year-old Salvador Ramos, was killed by police on site. At an Austin, Texas, appearance on Tuesday September 6, ahead of the November 8 midterm elections, Beto reportedly introduced a couple of special guests — Manuel and Julissa Rizo, who are the aunt and uncle of Robb Elementary shooting victim Jackie Cazares, 9.

“Manuel and Julissa are not here to cheer on a Democrat or to be here for a certain person for a certain office,” O’Rourke told the crowd, according to the Austin American Statesman. “They are here for her (Jackie’s) memory to take the action necessary to ensure that no other family has to go through what they’ve been through.”

View gallery Image Credit: MediaPunch/Shutterstock Ime Udoka, 45, is not only the former coach for the Boston Celtics but also the longtime partner...
Read more
Entertainment

View gallery Image Credit: Image Press Agency/NurPhoto/Shutterstock Brad Pitt, 58, has an opinion about who should be called the most handsome men in...
Read more

Bipasha Basu Makes Even Baby Pink Look Hot As She Slays In A High-Slit, Deep Neck Gown At Her Baby Shower

Bipasha Basu Looked Pretty In Pink At Her Baby Shower After six years of being married, Bipasha Basu and Karan...
Read more

Aishwarya Rai Bachchan Turns Into The Eternal Goddess Of Beauty As She Is, Donning A Beautiful Red Suit Making Our Heart Skip A Beat!

Aishwarya Rai Bachchan Turns Into The Eternal Goddess Of Beauty As She Is – See Pics Inside ( Photo...
Read more
Load more