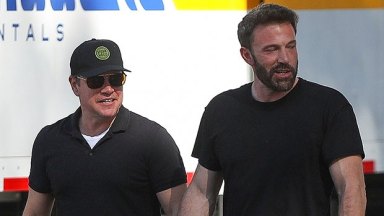 Ben Affleck and Matt Damon‘s are together again! The former Good Will Hunting stars reunited on the set of their new Nike biopic, and the photos show a pair of friends who seem to have picked up right where they left off. Matt, 51, and Ben, 51, appeared to be talking and laughing in the June 30 photos as they walked in the Los Angeles sunshine. Matt rocked a black short-sleeve shirt with a white t-shirt, along with a black ball cap and brown cargo pants. He finished off the look with a cool set of aviator shades.

Ben rocked a similar black top with gray pants. Both men seemed to be wearing very similar gray sneakers. The as-yet untitled project at Amazon Studios is reportedly about the iconic shoe brand’s pursuit of Michael Jordan‘s endorsement back in the ’80s. Ben and Matt are co-writers and co-stars, but Matt will produce while Ben directs. Ben is reportedly set to play Phil Knight, the famous shoe brand’s co-founder, opposite Matt as Nike exec Sonny Vaccaro.

“The film will follow Vaccaro’s conquest and introduce audiences to Jordan’s parents, in particular his powerful and dynamic mother, as well as former coaches, advisors, friends and those close to Jordan,” Variety reported in April. “The collaboration marks the first time Affleck will direct Damon. Both men will do a pass on Alex Convery’s original script, which appeared on the 2021 Black List (an annual ranking of Hollywood’s best unproduced scripts).”

Lindsay Lohan’s Parents, Dina & Michael: Everything To Know About Her Mom & Dad & Their Relationship Today

View gallery Image Credit: MEGA Jennifer Lopez doesn’t waste time getting back to what she best — looking amazing while getting from one...
Read more
Entertainment

View gallery Image Credit: Broadway World/Shutterstock / AFF-USA/Shutterstock The ladies of The Real Housewives of Atlanta finally made their way to Jamaica during...
Read more
Entertainment

Chapter 2 Fake Casting Scam Exposed! A Twitter Thread Reveals How People Are Pretending To Be Actors For Google’s Knowledge Panel

Ananya Panday Wears A Pretty Denim Corset Flaunting Her Busty Cleavage & You Can Steal This Look For Your Special Date-Night Outfit!

Getting implants can be one of the best decisions you make in your life. It's been proven many times over that implants are a...
Read more
Load more