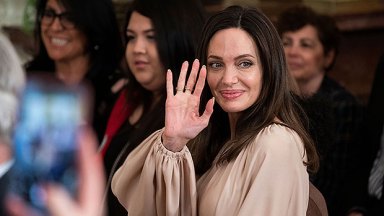 Angelina Jolie, 46, was witness to the terrifying effects of the Russian invasion of Ukraine while she was visiting the embattled country’s western city of Lviv. Over the weekend, the Oscar winner was forced to take cover as air raid sirens directed her and her terrified entourage to find safety as quickly as possible. In a video of the incident (below), Angelina is seen rushing from a building, down a long stairway and out to an open location hundreds of feet away from where she began the flight to find refuge.

There was undoubtedly an air of concern while the group is seen seeking safety, as several members look to be in a state of shock. At one point, an acquaintance to the Maleficent star turns to a camera and pleads, “Please, no more.” Fortunately, by the end of the video, Angelina appears to be calm and collected as she waves towards the camera and later can be heard telling nearby fans, “I’m okay.”

Angelina is reportedly in Lviv to visit hospitals and meet children affected by the invasion, which comes as no surprise as the Hollywood heavyweight is also a special envoy for the United Nations Refugee Agency. Earlier in the day, before the air raid sirens went off, Angelina was spotted in the town grabbing a beverage at a local coffee shop and chatting with the locals.

Last month, the Eternals star announced to fans via Instagram that she had landed in Yemen to offer support to the country’s people, telling her followers that the natives are in need of help much like Ukrainians. “As we continue to watch the horrors unfolding in Ukraine, and call for an immediate end to the conflict and humanitarian access, I’m here in Yemen to support people who also desperately need peace,” she wrote. “The situation here is one of the worst humanitarian crises in the world, with one civilian killed or injured every hour in 2022. An economy devastated by war, and over 20 million Yeminis depending on humanitarian assistance to survive.”