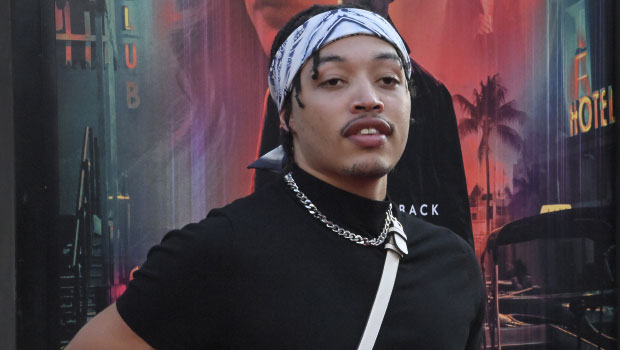 Thandiwe Newton certainly added fuel to the rumors she split from her husband Ol Parker as she was spotted kissing musician Lonr on April 23. The Westworld star, 49, packed on the PDA with the young artist during a stroll in Miami. The pair couldn’t keep their hands off each other as rumors swirl about Thandiwe’s personal life following her shocking exit from Magic Mike 3.

In the cozy snaps, the actress — who was seen without her wedding ring — kept her arm around Lonr as he made sure to keep her close during the lip locking sessions. With their fingers intertwined, the pair appeared to enjoy the afternoon outing in Florida, stopping periodically for some retail therapy and for some more face time. Thandiwe and Lonr certainly appeared very comfortable around each other to say the least!

The PDA party came as Thandiwe is dealing with the aftermath of reportedly being fired from Magic Mike 3 after getting in a heated argument with its star Channing Tatum, per Page Six. In addition, the film’s production team was reportedly concerned about Thandiwe’s mental health. “Thandiwe had been acting strangely on the set … enough that producers were worried about her state of mind,” a source told the outlet.

With all the speculation surrounding her, fans want to know more about this mysterious man who was caught kissing the star. Keep reading to find out about Lonr, below.

The Los Angeles-based artist’s real name is Elijah Dias. He was born in Milford, Massachusetts and moved out to the West Coast to pursue his career.

2. Lonr Has Worked With An Oscar Winner

Lonr collaborated on the song “Slide” by H.E.R. in 2019. H.E.R. walked home with an Oscar for Best Song at the 2021 Academy Awards for her hit “Fight for You” from Judas and the Black Messiah.

3. One Of His Songs Is In A Thandiwe Movie.

Lonr has been killing it in the music business for a relative newcomer. His song with singer Amber Mark, “Save My Love,” a song he collaborated on with singer Amber Mark, appears in the trailer and on the soundtrack for Thandiwe’s 2021 film Reminiscence. In the sci-fi flick, Thandiwe — who co-stars alongside Hugh Jackman and Rebecca Ferguson — plays the owner of a company that allows people to relive memories.

4. He’s Only A Few Years Older Than Thandie’s Eldest Daughter

Thandiwe and her husband Ol married in 1998 and eventually welcomed three children together: daughters Ripley, born in 2000, and Nico Parker, born in 2004, and son Booker Jombe, born in 2014. Lonr is reportedly around 24 years old, making him only a few years older than Ripley.

When asked about his relationship with Thandiwe, Lonr told Page Six, “From the relatively short time I’ve been fortunate to spend with her, I know Thandiwe and Oliver care deeply about the welfare of their children. That’s all I care about right now.”