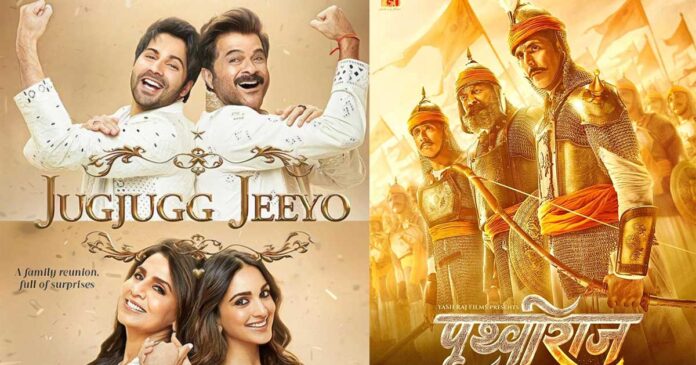 JugJugg Jeeyo starring Varun Dhawan, Kiara Advani, Anil Kapoor and Neetu Kapoor has opened on a good note at the box office. Not in double-digit but the film has managed to take a start and has shown a healthy jump on day 2. Scroll below to know how it performed on Saturday.

Released yesterday, the Varun Dhawan starrer has received a thumbs up from critics and audiences alike. After taking a slow start in the morning shows, the family entertainer picked up the pace in evening and night shows. With all the positivity around, the film has jumped on day 2 and is on its way to making bountiful on the opening weekend.

Now, as per the early trends flowing in, JugJugg Jeeyo has earned 12-13 crores. It’s a good jump of 30% or more from day 1’s 9.28 crores. The total now stands at 21.28-22.28 crores. Now, tomorrow being a Sunday, families will flock to theatres in big numbers and a big number is expected at the end of the day. The film is now aiming for a weekend total of 35 crore+ and it will be interesting to see if the topples Samrat Prithviraj’s 39.40 crores.

Meanwhile, JugJugg Jeeyo director Raj Mehta, who made his debut with Good Newwz, recently said that no matter which genre he explores, his core signature is ‘entertainment’. The director shares how his mind starts weaving a story from an interesting one-liner. For his debut, it was ‘two couples and sperm exchange’. For his latest film ‘two married couples of two-generation and they are on verge of divorce’.

“Keeping the rest of my thoughts aside, I strongly believe that cinema is for entertainment. For me, entertainment is something that evokes emotion, be it laughter, crying, excitement by watching an action scene or leaving the theatre with a thought in mind,” Mehta said while talking to IANS.