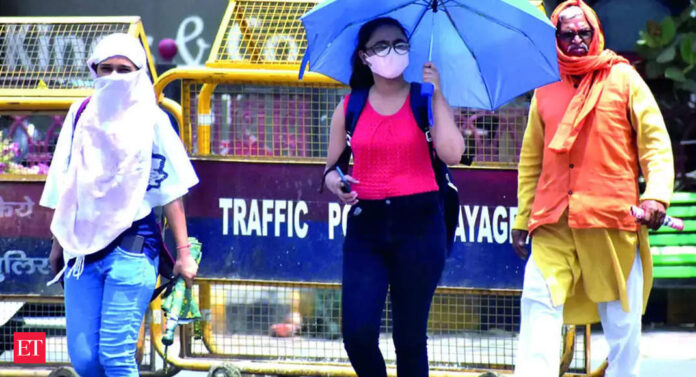 Indian cities, especially in the north, have already started reeling under an intense heatwave. It is not difficult to understand that increasing carbon emissions leads to sustained rising temperatures.

Cities are blamed for carbon emissions for their vehicular mobility, high population density and entailing reduction in open and green spaces, and aggravating practices such as poor solid waste management whereby solid waste is incinerated that aggravates emissions. Another major problem is fossil fuel-consuming and pollutant-emitting units such as thermal power plants being located near India‘s cities, nearly 61% of which are reportedly non-compliant.

The maximum carbon-emitting cities in the world are Hong Kong (35 tonnes per capita), Abu Dhabi and its suburb Mohammed Bin Zayed City (both 33, the former with a smaller standard deviation), and Singapore (31). In other words, the richest cities of the world. It should be noted that Indian cities do not match up to these global cities in terms of their carbon emissions. The maximum carbon-emitting Indian cities are Chandigarh and Vadodara, at 3.9 and 3.5 tonnes per capita respectively, way below that of the world’s top carbon-emitting cities. Nonetheless, Delhi has the most carbon emissions in absolute terms. It is undoubtedly one of the hottest cities in the country during summer.

Empirical work has unequivocally established the relationship between carbon emissions and urbanisation in India at the district level (no city-level data are available). But a positive effect of per-capita income and a negative effect of poverty on emissions have been found. This implies that the richer districts pollute the most and are also expected to be hotter than the poorer ones. Conversely, the poorer districts pollute less and are expected to be cooler.

In our dataset, we found Gurugram, a relatively rich agglomeration, to have the highest carbon emissions at 2.04 tonnes per capita. Conversely, the city with the least emissions is Chatra, one of Bihar’s poorest districts, at only 0.21 tonnes per capita. Also, the workforce participation and literacy rates have positive effects on carbon emissions at the all-India district level, showing that participation in the labour force has a positive effect on emissions as vehicular mobility is involved for commuting.

This means that the workforce there uses environmentally friendly means of commute such as public transport, cycles or walking. The Census 2011 data on transport corroborates this, pointing out that public transport in the state caters to the needs of nearly one-fourth of all commuters, in contrast to only 15% workforce at the national level. The negative effect of the literacy rate on carbon emissions in Tamil Nadu is a reflection that the educated tend to reduce carbon emissions, as opposed to what we find for the rest of India.

Incidentally, among the hottest 25 Indian cities as of March 2021, only one was from Karnataka (Kalaburagi), two from Tamil Nadu (Salem and Erode), and six each from Odisha and Gujarat. In Karnataka, urbanisation did not have any effect on carbon emissions per capita in our regressions. On the other hand, in Odisha, urbanisation was found to have a significant effect on carbon emissions.

To reduce carbon emissions and the intensity of heatwaves in our cities, commuters should try and use environmentally sustainable means of transport to get to work and other places – public transport, walking and cycling, or, where possible, work from home. However, what needs further investigation is how rising income can be made less polluting. Some ways in which the rich can contribute positively to the environment would be to walk more to improve their own health, use their cars less and try to learn from best practices to dispose of their waste more safely.

It is the poor who are often blamed for their practices. It’s time the rich do their bit to make our cities more bearable.